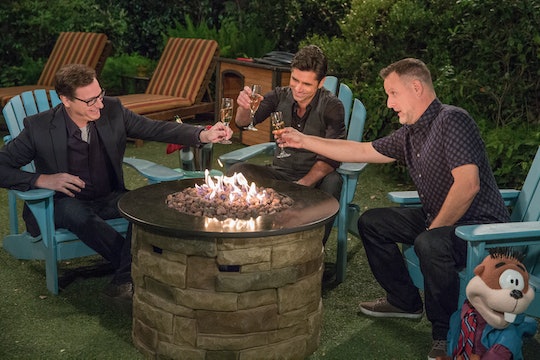 How Many Kids Does Joey Have On 'Fuller House'? Season 2 Will Introduce His Family

Fuller House's second season is coming soon and with it comes more information about your favorite Full House characters. In the first season, fans got to see where most of the Tanner family ended up in the present day. D.J. is now a mom with three sons, Stephanie is a professional entertainer who still loves to dance, and though Michelle isn't in the spin-off, fans now know she's living and working in New York. But while it's great to see what the Tanners are up to, many fans wondered about the other main characters and it turns out in the second season fans will learn more about Joey's wife and children. So how many kids does Joey Gladstone have on Fuller House? It turns out he has a total of four.

In an exclusive interview with TVLine, series creator Jeff Franklin said that Joey was always supposed to have a wife and kids but "it didn't make it into the script." Joey's wife is named Ginger and will be played by Laura Bell Bundy who you may recognize from Hart of Dixie or Anger Management. As for Joey's children, there's not much information about them so far. Only one of his children has information on the show's IMDB page. Joey's daughter, Joan Gladstone, will be played by Kingston Foster and she looks absolutely adorable.

Besides that, though, there's no other details that can be found about Joey's kids just yet. Thankfully there's not a long wait before the new season airs.

According to TVLine, the whole Gladstone clan is supposed to show up for the Fuller/Tanner/Gibbler's Thanksgiving. Similar to Joey, Ginger is "a little clueless in the parenting department," which should definitely be interesting to watch. Although Joey wasn't always responsible with the Tanner kids, he showed them nothing but kindness and love, so I bet he makes for a great dad, even if he is a little outmatched with four kids.

Fuller House Season 2 will be available for streaming on Netflix on Dec. 9.