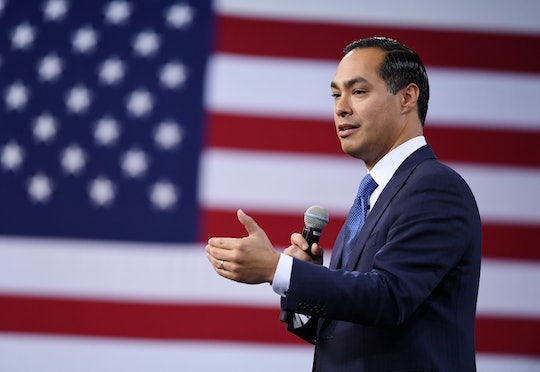 The 2020 presidential campaign is officially in full swing and every day we’re learning more about the Democratic candidates who hope to face President Donald Trump. One of them, in fact, really distinguished himself during the first debates, held in late June, and voters are likely interested in hearing more about lifelong politician, Julian Castro. But what about his life away from politics? For instance, how many kids does Julian Castro have?

Castro — a native of San Antonio, Texas — is definitely a family man. For starters, he’s married to Erica Castro, a former school teacher, according to Business Insider, and the couple have two young children together. Their first child, a daughter was born in 2009, as San Antonio News reported, and their second child, a son, was born in 2014, according to NBC News.

Those years bookended the term that he spent as the mayor of San Antonio, as Business Insider reported. From there, he went on to become the Secretary of Housing and Urban Development under President Barack Obama between 2014 and 2017.

Not much had been known about Castro’s home life as he’d been flying somewhat under the radar in the early election coverage. That changed a bit following the Democratic debates, however, as he spoke authoritatively and confidently against fellow Texan Beto O’Rourke on important issues such as immigration, NBC News reported. Castro came out of that debate in second place behind Elizabeth Warren, NBC News reported, so we should start hearing more about him, his stance on more issues, and of course those close to him in the near future.

Castro’s life has always involved public service, according to his campaign site. His mother was a Chicana activist, and often took her two sons — fun fact: Castro has a twin brother — with her to political events. “My mother is probably the biggest reason that my brother and I are in public service,” Castro told The New York Times in 2012. “Growing up, she would take us to a lot of rallies and organizational meetings and other things that are very boring for an 8-, 9-, 10-year-old. What I did get from my mother was a very strong sense that if you did public policy right, and you did well in public service, that it’s a positive influence on people’s lives.”

Castro’s policy stances are right in line with what you’d expect from a solid Democrat. For example, according to Politico, he believes in Medicare for all, decriminalizing border crossing, and green energy.

Before he became a professional politician, Castro was an attorney, having earned a JD degree from Harvard Law School, CBS News reported. And for some time, he owned a law firm with his brother, who is now also a member of Congress, according to In These Times.

In his campaign announcement on Twitter, Castro came down hard on President Donald Trump, saying:

It's clear that Castro is a devoted family man with his two kiddos and wife, and it seems safe to assume that his campaign will be, in part, focused on how to keep all families together.