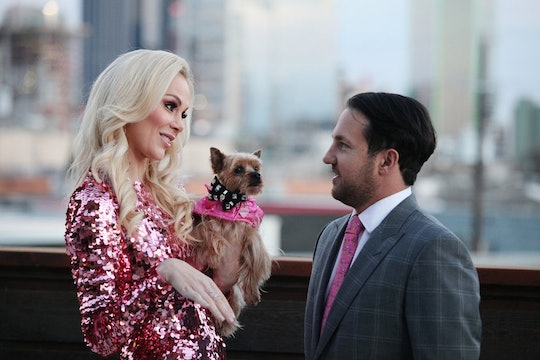 The newest Real Housewives of Dallas star has been so over the top with her love of pink and dogs, you may have forgotten that she is also a mom. So how many kids does Kameron Westcott have? This RHOD star has a very full house — especially if you include her pups also to be children of the house. Which, let's be honest, you know that Westcott totally does. Technically, Wescott and her husband Court have two children. But they also have two beloved dogs, making her a mom to four living creatures altogether.

Throughout her first season on The Real Housewives of Dallas, Wescott has seemed pretty determined to make a name for herself by standing out in some way. Brandi Redmond does that by having an entire family of redheads and a delightful sense of potty humor. (Honestly if I were at any of these gatherings I would want to sit next to Brandi). LeeAnne Locken stands out for being the woman most likely to threaten to murder you before the evening is over. So Westcott, at some point, decided to make the color pink and her dogs her "thing." Nobody tell her that Beverly Hills 'Wife Lisa Vanderpump already has a lock on those two things.

As distracted by those things as you might have been while watching the show, you may have overlooked the fact that Westcott also has children. Westcott has a daughter named Hilton who is six years old. She also has a son named Cruise who is three years old. And yes, in case you were wondering, they are extremely adorable, as very well-dressed children tend to be.

Obviously Westcott absolutely loves her kids, even more than she loves pink things. Scrolling through her aggressively pink-colored Instagram, you'll find lots of snapshots of herself and her children sometimes at the beach or on vacation in New York City. She describes her kids in her captions as her "everythings." As of right now there's no word on whether or not either of them will develop their mother's love of a certain color, or her entrepreneurial spirit — seeing as they're still too young to put together anything like a viable business plan.

As for her other baby, her 13-year-old Yorkshire Terrier named Louis Vuitton, the show aired some of the more lavish displays of affection Westcott has shown him. First, she decided to combine her love of pink with her love of dogs and created a line of organic pink dog food called Sparkle Dog which, yes, you can now purchase on Amazon if you would also like to feed your pooch something pink and prissy. I can't even really hate on the pink dog food. It seems to be doing OK, so there must be a market for it.

For the launch, Westcott threw an enormous pink bash where everyone was encouraged to bring their own pets, and Louis Vuitton was the guest of honor. He was paraded through the crowd on a pink pillow, which indignity he suffered with remarkable patience. Westcott has also employed multiple dog psychics to better understand what's really going on in his doggy brain.

All I'm trying to say right now is that if this is the kind of attention Westcott lavishes on her dogs, imagine what kind of treats her kids get. When I grow up I want to be a daughter to Kameron Westcott where I can be dressed up in pink tutus and glitter and fed pink food specifically formulated for me.