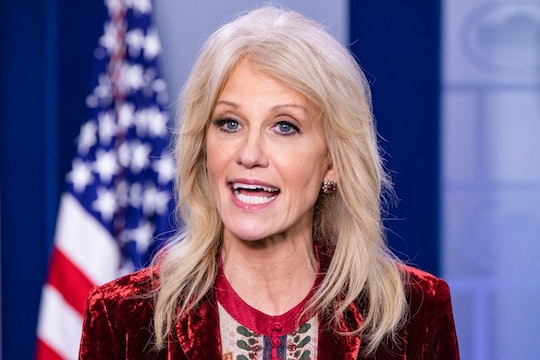 After nearly four years in the Trump administration, Kellyanne Conway announced Sunday that she planned to step away from the White House to better focus on her children. But how many kids does Conway have? The soon-to-be-former senior counselor to the president shares four children, one of whom recently announced they were pushing for emancipation, with husband George Conway.

"I will be transitioning from the White House at the end of this month," Conway said in a statement. "This is completely my choice ad my voice. In time, I will announce future plans. For now, and for my beloved children, it will be less drama, more mama."

Together, the Conways have four children who range in age from 15 to 10. While 15-year-old Claudia is perhaps the most well known of the Conway kids due to how outspoken and critical she has been of her mother's political views on social media, there is also Claudia's twin brother George Jr. and two younger sisters named Charlotte and Vanessa.

"Our four children are teens and 'tweens starting a new academic year, in middle school and high school, remotely from home for at least a few months," Conway said Sunday. "As millions of parents nationwide know, kids 'doing school from home' requires a level of attention and vigilance that is as unusual as these times."

While Conway cited a need to focus on assisting her children with their remote learning, her departure from the White House comes roughly one day after Claudia announced she was "officially pushing for emancipation" from her parents due to what she described as "years of childhood trauma and abuse."

"My mother's job ruined my life to begin with," the 15-year-old tweeted. "Heartbreaking that she continues to go down that path after years of watching her children suffer. Selfish. It's all about money and fame, ladies and gentlemen." In recent months, Claudia has used both TikTok and Twitter to repeatedly speak out against President Trump and her mother's political views and White House role.

After joining Donald Trump's presidential campaign in August 2016, Conway became the first woman to lead a winning presidential campaign and later took on the role of counselor to the president. But her time in the White House has been fraught with controversies, including her 2017 assertion the Trump administration was not lying, but spreading "alternative facts" and the time she promoted Ivanka Trump branded products during a 2017 TV interview, allegedly violating ethics rules.

This isn't the first time Conway has cited concerns about balancing a job in the White House with her children. In December 2016, weeks before she was named counselor to President Trump, Conway said she wasn't sure she wanted to take on a formal role in the Trump administration. "My children are 12, 12, 8 and 7, which is bad idea, bad idea, bad idea, bad idea for mom going inside [the White House]," ABC News reported Conway said while speaking at Politico's Women Rule event. "They have to come first, and those are very fraught ages."

Conway isn't the only one making career changes to focus on family. Moments before Conway announced her resignation, her husband George revealed he was stepping away from the Lincoln Project, an anti-Trump organization he'd co-founded. "I'm withdrawing from @ProjectLincoln to devote more time to family matters," he tweeted. "And I’ll be taking a Twitter hiatus. Needless to say, I continue to support the Lincoln Project and its mission. Passionately."

On Sunday, Conway explained that although she and her husband had different views when it came to the president, they were in sync when it came to their children. "George is also making changes," Conway said. "We disagree about plenty but we are united on what matters most: the kids."