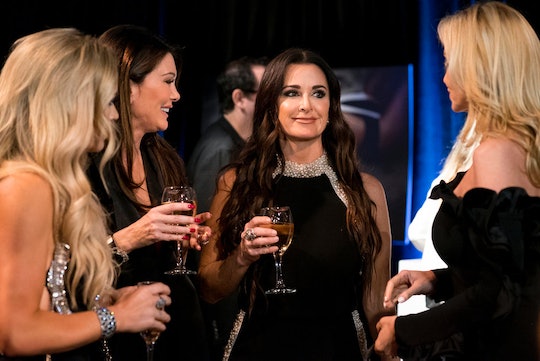 Kyle Richards Loves No One More Than Her Four (Count 'Em!) Daughters

When The Real Housewives of Beverly Hills Season 9 premiered on Bravo Kyle Richards had recently sent yet another daughter off to college on the show. So viewers who've been watching on-and-off over the years may be wondering how many kids Kyle Richards has. The Beverly Hills Housewife, who just celebrated her 50th birthday, has four daughters spanning two decades in age. She had her first child when she was 19 years old and had her last daughter at 39.

Kyle's oldest daughter, Farrah, is from her marriage to Guraish Aldjufrie. The pair began dating as teenagers and got married when Kyle realized she was pregnant. But after just two years together, the couple split. For the past 23 years, Kyle has been married to Mauricio Umansky, a successful real estate broker, with whom she shares three children: Alexia, 22, Sophia, 19, and Portia, 11.

Now 30, Farrah is a University of Southern California alum, where she transferred after two years at New York University, according to her LinkedIn page. She studied psychology and promptly went on to work for her stepdad's residential brokerage firm The Agency, where she serves as the director of client relations. Although her mom, sisters, aunts, and cousins have all dabbled in acting with varying degrees of success, Farrah has never gotten involved in the entertainment side of things.

"I'm just naturally a little more shy than my mom and some people in my family. But I'm not seeking out the spotlight as much," she said in an interview with Bravo's The Daily Dish. "I'm more a behind-the-scenes person and with real estate you can have a great life and have a fun, fun job and make a lot of money. So it's a little more stable and I like that."

Kyle's second daughter, Alexia, graduated from Emerson College last year and is now back home working at — you guessed it — The Agency. "Oh my god, spinoff alert!" Andy Cohen exclaimed when Alexia revealed the news while bartending on a recent episode of Watch What Happens Live. Sophia is a freshman at George Washington University and last Christmas, she managed the impressive feat of booking her own plane ticket home to surprise her family a few days early. The whole effort was well-documented on Instagram and, yes, Kyle cried.

Portia is still in elementary school, and Kyle says that her youngest daughter has the benefit of several maternal figures in her life, thanks to her older sisters. "Portia has four moms," Kyle joked in a March interview with People. "They really look after her."

Added Kyle, "When the other kids were little, I was a stay at home mom. Now I have a lot of jobs and it really is great to have my daughters being there and helping pick up with school and all that stuff."

Despite their age differences and blended family, it seems pretty clear that Kyle's daughters are super close-knit and share a strong bond with each other. The Real Housewives of Beverly Hills airs Tuesday nights on Bravo.