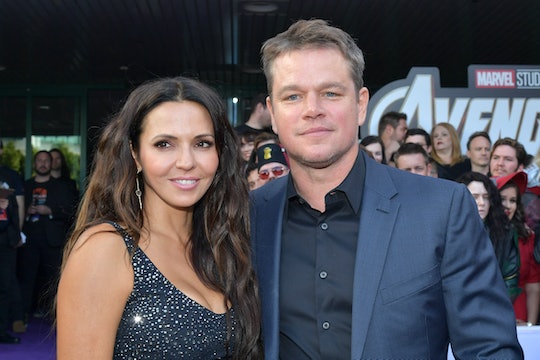 Matt Damon is a huge star, and he's spent much of his life in the spotlight. As such, fans tend to think they know him, but there are aspects of his personal life that allude even his most dedicated followers. For example, the topic of how many kids Matt Damon has isn't often discussed. After all, the actor doesn't have social media, so fans don't often get a glimpse into his day-to-day life. While he may not showcase his kids on social media, it's clear he loves them. In fact, Damon talks about his role as a dad often, and recently paid tribute to them with a new, delicate tattoo.

As he's not on Instagram, Damon didn't unveil the tattoo himself; as noted by Page Six, celebrity tattoo artist Daniel Stone — also known as Winter Stone — posted a black-and-white photo of the actor's new ink on his Instagram account for fans to enjoy. The photo showed the names of Damon's four daughters spelled out in thin script on different parts of his bicep.

The Good Will Hunting star is a father to 20-year Alexia, 13-year-old Isabella, 10-year-old Gia, and 8-year-old Stella. Their names appear above another — Lucy — which is a tribute to Damon's wife, Luciana Barroso, according to Entertainment Tonight. He got it years prior to adding his daughters' names, according to Page Six.

"FOR HIS KIDS," Stone captioned the Instagram photo of the tattoo, adding, "Honor tattooing one of my favorite actors!"

Despite keeping personal aspects of his life private, for the most part, Damon does occasionally speak about fatherhood. In December 2017, for instance, he opened up to TODAY Parents about how he and his wife avoid spoiling their kids. Naturally, a certain level of privilege comes with Damon's on-screen success, and as such, gifts are often sent to his home, occasionally for his kids. But as he told TODAY, his kids don't open the boxes — instead they send them to people who perhaps need them.

"They don't need anything. So we send everything on to people who need it," he told TODAY Parents in 2017. "When people send stuff to my kids, my kids have everything they need so we pass it right on. This is the life we're giving them. It's hard to figure out how to try to give them perspective. It's a source of tension in the family at times."

Being a parent is full of these tricky situations, but it's one the most rewarding experiences in the world. In fact, Damon gushed about just that and becoming a father in 2015, telling Entertainment Tonight the responsibility made him "feel really lucky." Damon acknowledged in the same interview with Entertainment Tonight that things change drastically when you add kids to the mix, but that "everything changes in little wonderful ways... My whole life opened up when I became a dad."

Being a parent is a one-of-a-kind experience. You'll never know greater love — or greater frustration — than you experience as a mother or father. Of course, you don't have to show your love with a tattoo, but it's definitely a unique way to paid tribute to your kids. Damon's tattoo is especially sweet, and hopefully his four daughters agree.