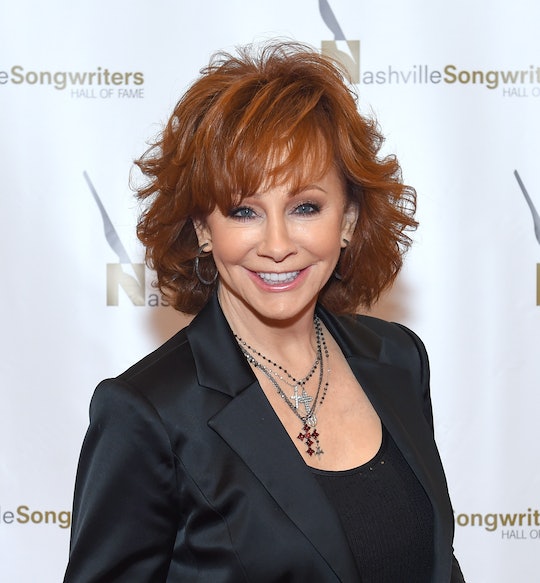 This Sunday, country music legend, Reba McEntire, will host the Academy of Country Music awards on CBS. Although the singer has been making music for decades, people might not be as familiar with her private life. Because of this, it's only natural for people to wonder during the show — how many kids does Reba McEntire have?

Sure, people know McEntire as a Grammy Award winning performer, with classic hits like "Fancy" and "If You See Him/If You See Her." A lot of people probably grew up with the country music legend playing in their homes since she first graced the Billboard charts in the late 1970's. But they might not be as familiar with McEntire's life as a wife, mom, and step-mom. So, here's a bit of a refresher on her love life.

In 1976, McEntire married steer wrestling champion, Charlie Battles, but they were divorced by 1987, according to Biography. But in 1989, McEntire married her manager, Narvel Blackstock, who she started a family with.

McEntire is the mom of six kids in total, according to Closer Weekly — five stepchildren from her two marriages and one son with Blackstock, named Shelby Blackstock, who was born in 1990, according to Biography.

Shelby is McEntire's only biological child, and he is just as interesting as his mother — he is a professional race car driver, according to Taste of Country. The 29-year-old only attended the University of Arizona for one year before leaving to pursue race car driving, according to the Rachel Ray Show. But McEntire is just a little terrified when he heads to the races. McEntire said during an appearance on Rachel Ray Show last summer that she was just a little scared watching his first Daytona race.

"When I first went to the Daytona speedway and he was racing at Daytona, you know, they drop that green flag and here they come, racing around," McEntire said. "And I was sitting there, filming him, and all I could see was his car, and then underneath the helmet was this itty bitty face! It just broke my heart! I was like 'Ahhh!'"

Shelby is not married, but McEntire doesn't seem to mind — she loves being a mom to Shelby.

"Shelby has brought us a lot of years of joy and laughter," McEntire told The Boot in 2010.

McEntire is also the mom to her five stepchildren. Not much is known about her step-kids from her first marriage — Lance and Coty Battles, according to Closer Weekly. And McEntire has three stepchildren from Blackstock's first marriage — Chassidy, Shawna, and Brandon. Although McEntire and Blackstock divorced in 2015, after 26 years of marriage, according to Country Living, she still remains close to all three of them.

"I don't consider Brandon, Chassidy, and Shawna step-children...I claim them all," McEntire told The Boot in 2010.

Although Chassidy and Shawna tend to keep a low profile, people might be more familiar with McEntire's stepson, talent manager Brandon Blackstock, who is married to Kelly Clarkson. The couple, who married in 2013, have four kids together, including Blackstock's two from a previous marriage. Needless to say, Clarkson loves having McEntire as a mother-in-law.

"Our job is very egocentric, so it's nice to be able to reflect on something else," Clarkson told Rolling Stone in May 2015.

And in 2018, at the Kennedy Center Honors event, Clarkson gave a speech where she talked about just how much Reba means to her, according to ABC News.

"Sometimes, when we meet our heroes, it doesn't always pan out how you hope," she said. "But meeting Reba — being friends with her, and eventually becoming family — has been one of the highlights of my life, truly."

With this in mind, Reba's personal life is just as exciting as her music career. I mean, can you imagine her family reunions? They sound like so much fun.