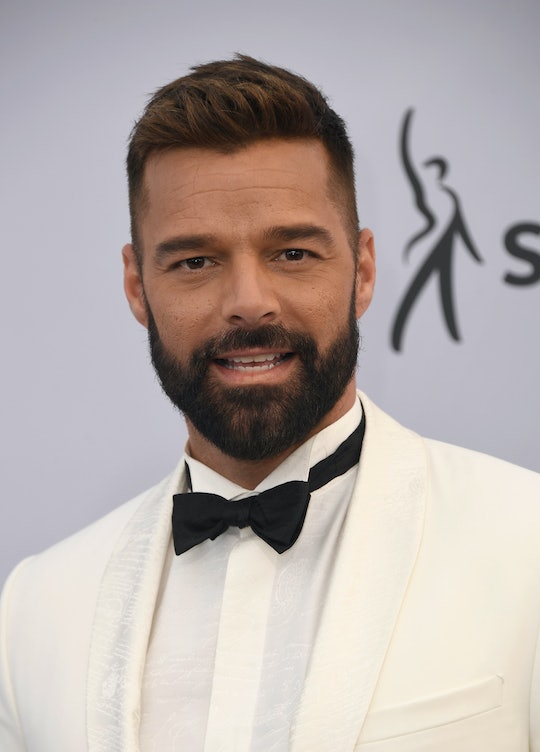 How Many Kids Does Ricky Martin Have? The Family Recently Grew By One

This handsome singer looks and sounds as good as ever and will be performing at the Grammys on Sunday, but some fans might be wondering, how many kids does Ricky Martin have? There was a new addition recently. The musician has been open about his joy as a parent, so it makes sense that Martin's clan is in expansion mode.

As People reported, Martin announced on New Year's Eve that he had welcomed a daughter with husband Jwan Yosef, little Lucia Martin-Yosef. That brings the musician's brood to three children total, the magazine reported, with 9-year-old twin sons Matteo and Valentino making them a family of five.

"We are beyond happy to announce that we have become parents to a beautiful and healthy baby girl, Lucia Martin-Yosef," Martin told fans on Instagram in the last hours of 2018. "It has been a special time for us and we can't wait to see where this stellar baby will take us. Both her beautiful brothers and me and Jwan have fallen in love with Lucia."

The two-time Grammy winner, according to Billboard magazine, is busy prepping for Sunday's show, at least according to his social media, which will see him perform alongside such talents as Little Big Town and Maren Morris.

But this doting dad clearly has time for his family life even as he participates in awards season, including palling around with Lady Gaga.

As his Instagram shows, Martin seems to spend a lot of time with his boys, plus there are adorable shots of him driving home after a workout (a parent needs self-care, too) with the baby's car seat visible in the rear.

"Workout 🏋️‍♀️ ✅ Now back to 🍼," he captioned the photo, so it's clear that the newborn phase and the endless feedings and diapers are as demanding for a superstar as for the rest of us.

It's not exactly "Livin' La Vida Loca" these days... but Martin also seems to be completely content with having settled down.

Married life is "so freaking cool," the performer told Us Weekly last year after tying the knot with Yosef, a Swedish artist. "I love it! I look at this foreign object, [my wedding ring], on my hand and I’m like, 'Yes but it’s mine!' And we look at each other every night and we go, 'This is so special. I like it.'"

Martin also told the magazine that the act of being able to legally marry his true love was meaningful: "That signed paper is very special, which makes me strong about 'come on guys. Every country should allow us to get married because it’s just natural.' It might take a while but anyways, I just think it’s important."

In addition to the new baby, life is pretty busy these days for Martin and family: He has also done more acting, starring in The Assassination of Gianni Versace: American Crime Story, the story of Gianni Versace's murder.

Add in his jaunt across the pond to see Princess Eugenie get married at Windsor Castle and you can tell that Martin is in the best place of his life. Before he came out, in 2010, he struggled with feeling that he wouldn't be teaching his kids the proper example if he wasn't being honest with fans, as Martin told Oprah Winfrey.

And with Martin and Yosef putting down roots with the purchase of a Beverly Hills Modernist home, according to Architectural Digest, this adorable family may not be complete with just three kids.

Martin told Us Weekly last year he wants to expand his brood to four or more. "I want people to look at me and see a family and say, 'There’s nothing wrong with that.' It’s part of my mission. It’s part of my kids' mission as well. My kids ask me about having two daddies and I tell them we are a part of a modern family," he dished to the magazine.

Martin's diaper days may not be entirely over just yet, but at least for one night, he'll be focusing on his career. I can't wait to see him perform.

More Like This
Elon Musk Reveals He Gave Himself & His Son X Matching Haircuts In Rare Throwback Pic
H.E.R Is Becoming A Disney Princess As Belle In New Beauty & The Beast TV Special
Obama Also Can't Stop Listening To Beyoncé’s Song Of The Summer "Break My Soul"
The Bear’s Jeremy Allen White Is A Private Breakfast Chef For His Daughters