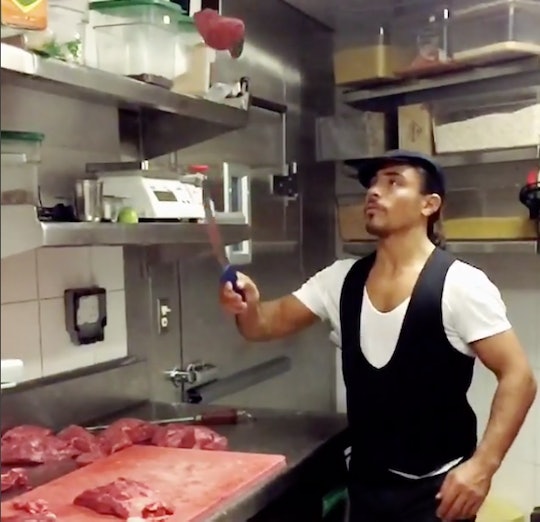 I'm not usually one for regrets, but when I discovered Salt Bae, the handsome Turkish chef who's taken Twitter, and the entire internet, by storm, I began to wish that I had waited to go abroad to Turkey until now, so I could meet the meme star. But alas, though I've spent my fair share of time in Istanbul, I didn't get to meet Salt Bae, otherwise known as Nusret Gökçe, while I was there. Regrets aside, I can't help but love Gökçe and his mystifying meat-shredding skills, for reasons too numerous to list. But perhaps one of the most intriguing aspects of Gökçe is his relative mystery and the lack of personal details available to me—I mean, the internet. While he doesn't seem to wear a wedding band, that doesn't necessarily mean he's still on the market, and in fact, his Instagram feed has left us all wondering how many kids does Salt Bae have, if any?

Of course, Gökçe's fame is relatively new, with the Instagram video of him cutting and salting a steak only having gone viral 10 days ago, which means he may still reveal more intimate details about his life. But for now, we speculate.

Let's look at the facts: In a 2013 interview with Aksam News, Gökçe discussed his journey to becoming the famed chef that he is, including a trip to Argentina during which he really fine-tuned his skills. But the interview makes no mention of Gökçe's relationship status, and his Instagram feed is pretty absent of any couple-y pictures.

However, he did post the following photo on his Intagram 18 weeks ago, showing him with a total of nine children and the caption "the man who does not spend time with his family is not a real man."

Obviously, the word "family," is a pretty loose term, and the children pictured with Gökçe could easily be nieces and nephews, or even the kids of some of his close friends. However, Salt Bae is such a bae, that it wouldn't be too shocking if he had adopted those kids out of the pure kindness of his heart.

In all seriousness, though, no one really knows Gökçe's relationship status, if he's a dad, a cool uncle, or if he just loves kids. What do we know, then? If he is father to any of those children, Gökçe is a lot more talented that we think (seriously, being a working parent is hard).