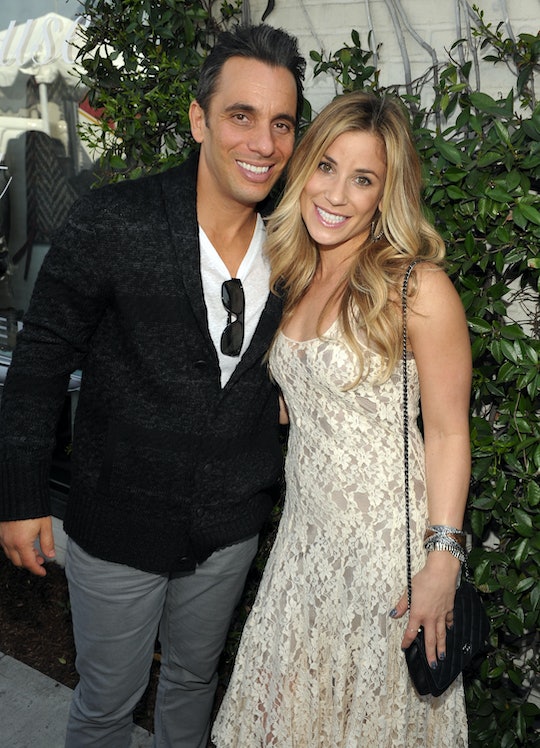 With comedian Sebastian Maniscalco tagged to host MTV's Video Music Awards this year, music fans are likely curious about the funnyman and his life off the coveted stage. For example, as his other half and family are often part of his comedy, many may be wondering how many kids Sebastian Maniscalco has with his wife, Lana Gomez. As it turns out, Maniscalco is a proud papa to two sweet kiddos.

Maniscalco has been married to Gomez — an accomplished artist whose work has been featured in publications like The New Yorker and House Beautiful — since 2013, according to O Magazine, and they've since welcomed a daughter and a son together. In May 2017, they welcomed their daughter, Serafina, who was named after his grandmother and Gomez's mother, as Maniscalco shared on Instagram at the time. "We are so excited to introduce the newest member of our family — Serafina Simone Maniscalco!" the proud dad captioned a collection of photos of her newborn daughter. "Serafina was my grandmother's name, Simone is Lana’s mom, and Serafina Simone is our baby girl!"

Maniscalco's son, Caruso, was born earlier this summer, on June 15, according to People, and his baby boy's name also has symbolism behind it. "We’d been thinking about the name Caruso for a while," the comedian told the magazine. "Lana and I stayed at Hotel Caruso on the Amalfi coast on our honeymoon and loved it. When we learned it actually means 'boy' in Sicilian, it sealed the deal!"

Beyond being a proud and loving dad, Maniscalco is a very successful comedian. In 2018, for example, he set records by selling out Radio City Music Hall for five nights in a row, according to O Magazine. He’s also performed at venues like Las Vegas Caesars Palace Colosseum, and ranked 10th on Forbes' list of highest paid comedians in 2018.

In addition to comedy, Maniscalco is also becoming known for his acting chops. In 2018, he cameoed in Tag and had a supporting role as Viggo Mortenson’s character’s brother-in-law in Oscar-winner Green Book, according to his IMDb page. Peter Farrelly, director of Green Book, praised Maniscalco when he spoke to Variety about the film, saying: "Someone said, 'I don’t think he’s an actor,' and I said, 'His whole performance is an act.' He doesn’t just tell jokes, he’s really becoming the character up there. But what I didn’t know was how good he would be."

Despite his great success throughout his career, there is one arena where Maniscalco admits he’s not quite up to snuff: current music. But he’s said that he's learning; during a recent appearance on The Tonight Show, Maniscalco told host Jimmy Fallon that his family commented on his lack of musical knowledge when they heard he’d landed the hosting gig, but that may be exactly what the network is aiming for. "I think this is going to be fun because MTV wants kind of an unfiltered look at the VMAs through my eyes," he told Fallon in June.

How well that gambit plays with both performers and the audience remains to be seen, but it seems that Maniscalco is up to the task. "What I've done over the last 20 years to prepare me for the VMAs is I've basically done every show you could possibly imagine in every different environment, whether it'd be in a boxing ring in Manteca, California or a bowling alley in Fort Lauderdale, Florida," he told Entertainment Tonight. "I've done the smallest of shows and the largest of shows and everything in between and over the last 20 years I've come across a lot of different situations and I've learned how to react to those situations in real time."

In a show known for surprising moments, those mental reflexes will be put to the test tonight, Monday, Aug. 26, when the VMAs air on MTV. And, who knows, perhaps his adorable kids will get a sweet shout-out for their dad on stage.