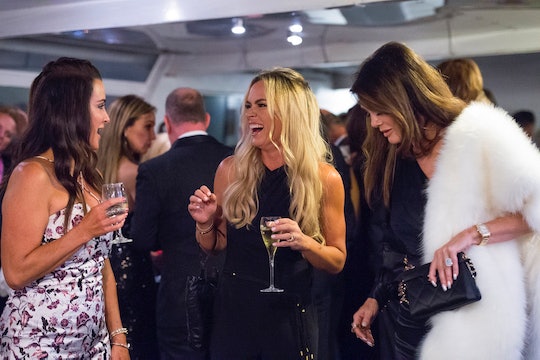 Like many of her Real Housewives costars, new 'Wife Teddi Mellencamp Arroyave is also a proud momma. So how many kids does Teddi Mellencamp have? The RHOBH star is a proud mom to her adorable children, Slate and Cruz, as well as a loving stepmom to Isabella. Like many proud mothers, Teddi posts pictures of her babies all over her social media accounts, which further proves (if proof was necessary) that she's an incredibly devoted parent.

Teddi is married to Edwin Arroyave, the CEO and founder of a home security company. Together, Teddi and Edwin have two small children. Their daughter, Slate, turned 5 years old in October. Their son, named Cruz, is only 3 years old — conveniently close in age to fellow Real Housewife of Beverly Hills Dorit Kemsley's son Jagger, as everyone got to see in the first episode of Season 8 of the show. Edwin's daughter Isabella from a previous relationship is 9 years old, making her the perfect age to show her younger siblings a thing or two about how the world works. Basically, the five of them are potentially one of the most perfect families I've ever seen on TV and the photos of them are almost too cute to handle. But you don't just have to take my word for it.

The show's first introduction to Teddi showed her and her family playing around in their backyard. A backyard which includes an infinity pool and a trampoline — which makes it basically kid-heaven in my book. Dorit was introduced to Teddi when she took Jagger to one of the BeatBuds mommy-and-me music classes Teddi hosted in this incredible backyard. Say what you will about Dorit, but her kid is absolutely adorable, so I'm glad that she and Teddi were able to hit it off so well right from the get-go. You can't have drama when there are 4-year-olds learning to play drums. You just can't.

Teddi has said that though she definitely grew up well-off (hard to avoid when your dad is a rockstar in the most literal definition of the word), she was raised with the down-to-earth midwestern values John Mellencamp has always espoused in his music. "Yes, I have that famous last name, but I grew up with very grounded values and was taught that money isn’t everything —something I like to think I’m teaching my own children, Cruz and Slate," Teddi wrote in her first-ever Real Housewives blog. And from what was seen from Teddi in Las Vegas, when she was teased for not throwing down thousands of dollars at the table, it looks like she puts her money where her mouth is.

Teddi is clearly also raising her kids with a healthy sense of humor. She also wrote in the blog, "I don’t know what I’m teaching them by revealing that their father/my husband Edwin was supposed to be a one-night stand, other than life doesn’t always go how you expect it and you should always learn somebody’s name when you first meet them." Personally, I love this down-to-earth attitude, and the recognition that sometimes life just happens. That's a value that every kid should know.

Sure, it has to be hard teaching a kid the value of a dollar when they grow up filthy rich, but I have every expectation that Teddi will do so. It's clearly important to her. It is also clear that this family has a ton of fun together, and I can't wait to see more of them. And who knows, maybe one day we'll see Teddi's kids follow the likes of Lisa Rinna and Yolanda Hadid's model children. Or maybe they'll be equestrians like their mom. Whatever they do, I'm glad they have such a loving mom.