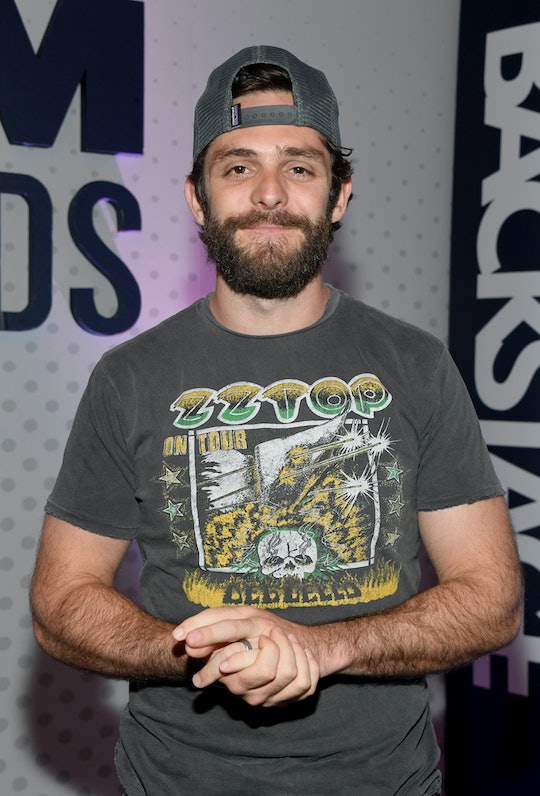 How Many Kids Does Thomas Rhett Have? The Singer's Daughters Are Oh So Cute

Lauren Akins and Thomas Rhett have built an adorable little family at lightening speed. The pair welcomed one daughter through adoption, and almost immediately learned that they were expecting a baby girl, according to a report from People. The couple are hoping to expand their family even more in the future, but in the meantime, fans are wondering, how many kids does Thomas Rhett have?

The country star's new hit, "Look What God Gave Her," which will be featured on Rhett's upcoming album Center Point Road, is inspired by Akins, like many of the singer's songs, per The Tennessean. She features prominently in the video, dancing with daughters Willa Gray and Ada James. The pair are two years apart, but came into Rhett and Akins' life within a matter of months, according to Country Living. Per the magazine, Rhett and Akins struggled with infertility, so they decided to look into adoption in 2016. Atkins told People she was on a missions trip in Uganda with 147 Million Orphans when she met Willa.

"She was a total orphan and didn't have any biological relatives, no one," Akins told the magazine at the time. "Her life was going to be at the children's home unless someone tries to give her a home. So I thought, 'We need to find her a home.' I thought we'd be the helpers — and then Thomas Rhett said, 'We'll do it!'"

After making the decision, the pair began an adoption process that lasted about a year, before finally bringing Willa into their home. In the midst of their travels to and from Uganda, they learned that Akins was pregnant. The pair welcomed the surprise, and continued the adoption process. Akins told the magazine that her meeting Willa in the midst of her struggle to conceive felt like divine intervention.

"All orphans have heart-wrenching stories, but it felt like this specific baby was ours. I think that the Lord knew what he was doing when he did not let us get pregnant," she told People.

According to Country Living, because of Ugandan adoption requirements Rhett and Akins had to foster Willa in the country for a year. During the time, the outlet reported, the couple traveled abroad frequently to move the process along. At long last, on May 11, 2017, they were able to bring Willa home to Nashville, Tennessee with the help of Akins' parents. Her arrival came just a few months before Ada James arrived.

The process was difficult for Lauren, according to Country Living, as she wasn't able to travel to Uganda during her third trimester. She told People, "It felt weird leaving one daughter and making sure the other one is OK," adding that she "couldn't do it another way." Akins told the outlet that she wished she could have been the one to bring Willa home, but said "it was a blessing in disguise."

Three months after Willa came home to Akins and Rhett, the pair welcomed Ada James. They announced her arrival on Instagram, sharing a photo from her birth. In the picture, Akins can be seen in a hospital bed holding her baby girl, while Rhett leans in for a better look (or for a kiss). Akins revealed that she was in labor for 36 hours, adding, "only Jesus got me through that." She noted that her daughter was "sooo worth it," calling her "stinking cute." The couple thanked fans for their prayers and support, adding that they were "doing well" and Willa was "so excited to finally have a baby sister."

After both their children's arrivals, Rhett and Akins opened up about their names. The couple told Southern Living that both Willa and Ada were significant to them, and came from members of their families. Willa was inspired by Rhett's grandfather, Willard, while Gray came from Akins' brother Grayson. Ada meanwhile was inspired by Akins' grandmother, and the name means happy, they told Southern Living. James was a family name on both sides, Akins told the magazine.

The pair are looking to expand their family again, Rhett told Access Online. Akins reportedly wants to have five children before turning 34. Rhett is on board with the plan as well, he told the outlet.

"Lauren wants to have five kids before she turns 34," Rhett shared with the outlet. "That is her plan. So you can probably expect three new babies in the next five years."

The couple hasn't yet announced another child, but fans are looking forward to the moment that they do. In the meantime, they continue to share sweet moments with their daughters, who appear to have an unbreakable bond, based on social media posts. Hopefully they're ready to be big sisters in the near future.