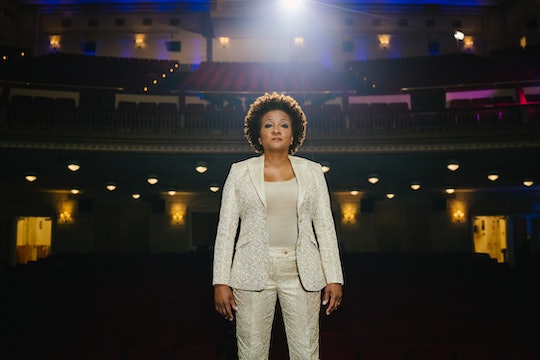 Wanda Sykes' new Netflix special just dropped and in it, the 30-year comedy vet offers a mix of both the personal and the political. Since family anecdotes feature prominently in the special, viewers tuning in may be wondering how many kids Wanda Sykes has. She's the mother of ten-year-old fraternal twins named Olivia Lou and Lucas Claude, who she welcomed in 2009 with wife Alex Niedbalski.

Sykes and Niedbalski wed in 2008, and a month later, Sykes famously came out at a same-sex marriage rally in Las Vegas protesting Proposition 8. In a 2013 interview with Oprah Winfrey, Sykes explained how having kids helped mend her relationship with her conservative parents, which suffered after she came out them at age 40. They didn't attend Sykes wedding, which triggered a period of estrangement, but the family reconciled once grandkids were in the picture. "We're in a great place right now, my parents are wonderful," she said, per Express. "They weren't at my wedding, but they were at the kids' last birthday party."

Sykes, Niedbalksi, and their two children currently split their time between Los Angeles and a suburb of Philadelphia, but in a 2015 interview with the Windsor Star, Sykes revealed that she was adamant about not bringing her kids on the road with her when she tours. As for including them in her standup material, she maintains a policy of keeping herself as the butt of the jokes, telling Variety that she prefers to talk about how normal it is for parents to mess up.

Sykes does address the identity politics within her own family both in interviews and in her comedy, and she doesn't shy away from punching up at whiteness, even though her partner and two kids are white. In fact, she addresses her family's racial makeup head-on in her material, joking about everything from how the world perceives black and white moms to how disappointed she feels when there aren't any black kids at her kids' birthday parties. But to only address politics or her personal life without acknowledging how they influence each other would be a disservice, she says. Sykes told Variety in an interview ahead of the special:

For me to go out and not do anything politically, it would be ignoring the orange elephant in the room. People expect me to say something. I’m a black woman and I’m a lesbian; there’s a lot of sh*t that’s wrong in my world right now. So for me to just go out and talk about my family and act like everything is fine, it’s like, what planet am I living on?

Meanwhile, Sykes' Netflix special comes after a political dispute with the streaming platform itself — one rooted in, she says, racial and gender bias.

Last year, comedian Mo'Nique called for a boycott of Netflix after revealing that she was offered significantly less money to do a standup special on the platform than Dave Chapelle. Sykes came forward and admitted that she was offered even less — less than half Mo'Nique's figure — for her first special with the platform. (She eventually took it to Epix, where it aired in 2016.) Sykes told Variety that she believes standing up to the platform last year helped her secure a more lucrative offer this time around.

In any case, Sykes and the platform appear to have mended fences and she remains confident that Netflix is the best home for her latest special.