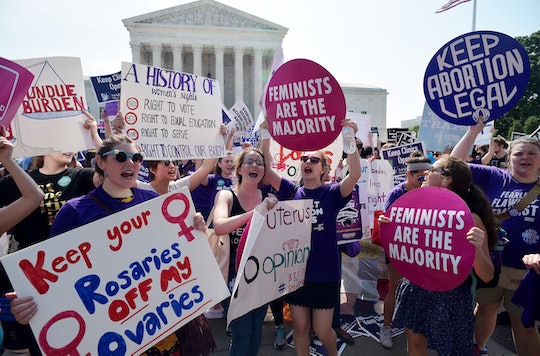 How Many Late-Term Abortion Doctors Are Left In The US? Only A Handful

Being an abortion doctor in the United States is not the safest or most widely-lauded of occupations. Many misconceptions surround the profession, and those misconceptions are only furthered when a United States presidential candidate talks about how late-term abortion providers, specifically, "rip the baby out of the womb in the ninth month" on a national stage. So how many late-term abortion doctors are left in the United States? Only a handful.

Anti-abortion activists may like to promote the fiction that late-term abortions are happening willy-nilly, for self-centered, irresponsible women who just can't make up their minds. But these abortions are actually incredibly rare. According to the Guttmacher Institute, only around 1.3 percent of abortions happen after 21 weeks, and "late-term abortions" don't begin until 21 to 26 weeks, or in the third trimester. Furthermore, these procedures are almost all performed either because the mother's life or health are at risk, or because the fetus has developed such severe birth defects that it likely will not survive outside the womb.

Since Donald Trump's comments about late-term abortion at the final presidential debate, many women have come forward about their own late-term abortions, and the common thread in their stories is that the decision to terminate their pregnancies was not an easy one, but one they ultimately made in an effort to spare future, greater pain.

Also not easy for these women? Finding a doctor to perform the procedure.

Throughout the country, late-term abortion doctors are vilified and threatened on a regular basis. One of the remaining doctors, Dr. LeRoy Carhart, practiced for many years in Nebraska before opening a clinic in Germantown, Maryland. Back in the 1990s, his farm was burned down, and the blaze killed over a dozen of his horses. His clinic has also been smeared with manure, he and his staff have received envelopes containing suspicious white powder, and more, according to Newsweek.

Another doctor, Susan Robinson, provides late-term abortions in Albuquerque. She was motivated to help women after a gunman killed two receptionists at an abortion clinic in the Boston suburbs in 1994. Now, in addition to practicing, she helps train a new generation of abortion doctors and, as she told The Hairpin, she hopes people realize,

these late abortion decisions are carefully made by these women. They have been thought out, wrestled with, agonized over. They are never casual. And the need for late-term abortions will never go away.

And when asked about fearing for her personal safety, she said, "I don’t like to talk about what I do specifically to protect myself, but this is an aspect of the job, certainly."

Both Robinson and Carhart stressed in interviews that they don't provide abortions to everyone who comes to their clinics. They consider the ethics of each case separately, not taking it lightly.

The directors of After Tiller also followed Dr. Warren Hern, who practices in Colorado, and Dr. Shelley Sella, who, like Robinson, works in Albuquerque. As the directors said of their subjects in their director's statement,

They thought that if more Americans could meet them, and hear where they were coming from—even if they still disagreed with the work that they did—they at least might not want to kill them.

It's no wonder that only a few of them remain.

And yet their work is important. If women ultimately make the painful decision to terminate a pregnancy for good reason, they should be supported and helped. These doctors face regular danger in order to do that. It's too bad there are so few of them left.