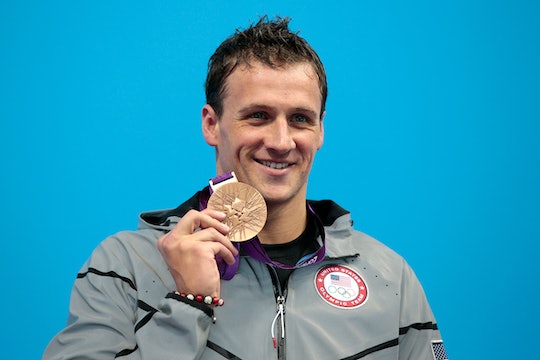 How Many Medals Has Ryan Lochte Won? The Majority Are Gold

In 2012, Ryan Lochte became a household name. He broke Olympic records, coined and claimed a catch phrase ("Jeah!"), and, let's face it, secured his status as one of the most classically good-looking guys in the pool. But even before the London Olympics, Lochte was a formidable swimmer. He's competed in the Olympic games since 2004, accruing accolades and improving his swim-game each year. Lochte remains neck-and-neck with Michael Phelps, even managing to get the gold over him in his best event. With three Olympic games under his belt and a fourth on the way, you might be wondering: How many medals has Ryan Lochte actually won?

We'll start with 2004. Lochte won his first gold medal in the Athens games in the 4x200-meter freestyle relay. The relay team consisted of Michael Phelps, Peter Vanderkaay, and Klete Keller. The U.S. swimmers beat a legendary Australian relay team that had won all of their races within the past six years. For his second (and final) 2004 Olympic appearance, Lochte garnered a silver in the 200-meter freestyle; Phelps won the gold. Total medal count: 2

In his next Olympic games in 2008 in Beijing, Lochte qualified to swim in four events. Once again, he won gold with Phelps and Vanderkaay in the 4X200-meter freestyle relay, this time with Ricky Berens to round out the team. This legendary race marked the first instance in which a team dipped below the seven minute mark in this particular relay; it was record-breaking. Lochte won his first individual gold medal in the 200-meter backstroke and won two bronze medals, in both the 200-meter individual medley and the 400-meter individual medley. Total medal count: 6

The year: 2012, city: London. In his most memorable games yet, Lochte beat out Phelps in the 400-meter individual medley, winning gold. He won another team gold medal in the 4x200-meter freestyle relay with Phelps, Berens, and Conor Dwyer. He won an individual silver in the 200-meter individual medley--Phelps got the gold--and another silver in the 4x100-meter freestyle relay. His one bronze medal was in the 200-meter backstroke. Total medal count: 11

The very obvious pattern? Lochte's been coming for Phelps ever since 2008. Though they work like magic when put on the same relay team, in individual events, Phelps typically pulls ahead. In the 2016 Rio trials, the "friendly rivals" were close yet again, though Phelps beat Lochte in the 200-meter individual medley. A member of the 4x200-meter freestyle relay team, Lochte will be swimming the same two events that he swam in Athens in 2004. The potential for two more gold medals? Awww jeah!