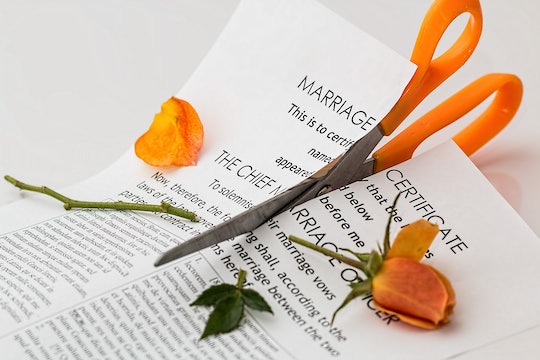 There are a lot of things to consider before starting a family. Can you afford it? Are both partners on the same page as far as values are concerned? And then there's the particularly troubling question: Will a baby ruin our relationship? How many millennial parents get divorced after having kids? The thing is, there's no hard and fast data, since a couple could get divorced at any time. Just because they didn't divorce after one year, or five years, doesn't mean they won't in the future. The short answer is, less than than their parents, but more than their childless friends.

We've long heard about the statistic that 50 percent of marriages end in divorce. But that's all marriages combined. When you filter it by generation, baby boomers make up the majority of divorces. And while some split up right after having kids, some held on until the stigma of divorce went away. Now their kids are grown, they've got grandchildren, and they're still divorcing in record numbers. It's estimated that a couple marrying today has a 40 percent chance of divorcing, not 50. It's thought that this is due to couples waiting longer than ever to get married, and of course more people than ever don't marry at all.

Studies have shown that all marriages go downhill a bit with time; there's a reason they call it the "honeymoon phase." But while childless couples have a "gradual deterioration in relationship functioning" (how romantic), having a baby unfortunately gives that deterioration a big head start. It's understandable; going from parties and date nights to diapers and sleepless nights is a big change, everyone's tired and cranky, and suddenly, there's someone else competing for a couple's love an attention. That doesn't mean it's insurmountable, just that it can take a few years to right the ship again.

An increasing number of millennials, wary of marriage thanks to witnessing their parents divorce in the 80s and '90s, are now cohabitating and raising kids without ever tying the knot. In fact, about half of all U.S. babies are now born to unwed parents. But it's no magic bullet; according to psychology professor Matthew D. Johnson, "The relationship burden of having children is present regardless of marital status, gender orientation or level of income." One study found that only 35 percent of unmarried couples stayed together for at least five years after having a child.

So what's the solution? Just don't have kids? Have them on your own and sort out a partner later? Well, sure, if that's what suits you. But if you do want a nuclear family, just try to hold off until you're sure you've found the right person, and recognize that those first few years after the baby's born will be tough, but you can get through it together with a little patience and luck.