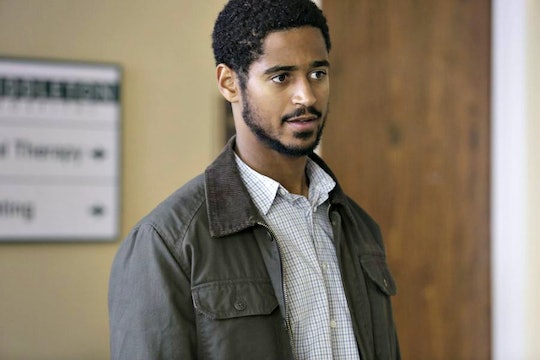 It's always heart wrenching when a beloved character dies on a show. But one good thing about Shonda Rhimes is that she doesn't always take a character away entirely, even if they're no longer "alive" in real time. Think of all the flashbacks of Derek Shepherd on Grey's Anatomy, for example. On How to Get Away With Murder, it's even easier to do this, because the flashbacks are the entire story, which begs the question: how many more episodes is Alfred Enoch in on HTGAWM? As far as we all know, he will definitely be around until the end of the season, as the final leg is all about finding out what the heck happened in the time between when Wes left the police station, considering whether or not to give testimony against Annalise, and when the house blew up.

Enoch told Variety that even he was a little unsure about exactly how much Wes would be appearing on the show. "I just know I’m going to be in it," he said. "How exactly that will pan out and how much of the story is onward from the night of the fire and how much is backward from what happened that night is episode-to-episode. With each script, I’m just surprised episode-to-episode with what happens."

However, if you were crossing your fingers that he might be a regular character next season, too, just in flashbacks — don't hold your breath. Enoch told Variety that he "genuinely [knows] nothing about that," but he probably does (because wouldn't that be awful if you didn't know if you had a job or not?) and he's probably not on it. At some point, we're all going to have to let go of Wes, sadly.

On some level, these flashbacks make it worse because you start to realize that you actually liked Wes in the first place. I have an unpopular opinion: I thought he was kind of annoying from the start, but now that he's dead and we're watching his last moments in flashes, I'm sort of coming around to Team Wes. And I realize that I can't imagine what the show would be without him. It's messing with my mind.

But that always happens on TV shows when your favorite characters go. Whether it's Dylan (Luke Perry) leaving town on 90210 or, as I mentioned earlier, Derek Shepherd dying on Grey's Anatomy — seriously, it took me months to recover from that — a major character leaving is tough. The flashbacks only make it harder. So soak Wes up now while you still can, because next year it will probably be totally different.