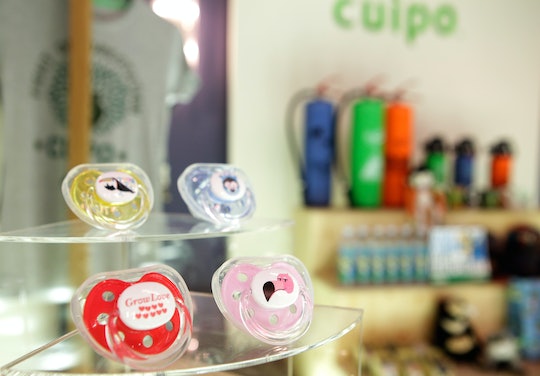 Every Baby's Different, So Here's How To Figure Out Just How Many Pacifiers You Need

With each new baby that has joined our family, I've had high hopes for pacifiers. Unfortunately, my hopes were dashed each time — that is, until baby number four. Luckily, this little caboose is chugging along quite nicely with his artificial boob, and I'm enjoying a bit more sleep than ever in this stage of babyhood. Before he was born, I'd only bought one trial pacifier (no, I hadn't saved any from my attempts with his older brothers), so when it became clear he was playing for keeps, I realized I had no idea how many pacifiers I need.

I surveyed my friends to find out, and unsurprisingly, the answers varied widely with each mom. I heard everything from four to a dozen, which seemed like stellar advice and about what I'd expected. The only problem was I wanted to use the all-natural, rubber latex kind, and those are a little more expensive. Sure buying a couple wouldn't exactly break the bank, but buying 12? I didn't think we could swing that.

So I turned to a mom that I knew used the brand I had my eye on to ask how many she had, and how many she thought I needed. Her answer? One.

After I picked my jaw up off the ground, I asked her to explain. "It's simple," she said. "If you only have one, you view it entirely differently than if you have eight. If that binky is the only one you've got, you're going to treat it like it's made of solid gold. You won't lose it, you won't let it stay dirty without washing it, and you won't go anywhere without it."

The argument was strong and I took it to heart — kind of. I bought two, and designated one as the go-to pacifier and kept the other in case I found myself in a total pinch, because I couldn't handle the thought of having no back up at all. It's a test run, I thought to myself. I can always buy more if I need them. But so far, my friend has been right. My baby is nearly 5 months old and the restriction of only having one pacifier has made life pretty simple.

However, Valerie Brockenbrough, U.S. distributor for Natursutten, tells Romper the company recommendation is that you keep two pacifiers and alternate them. "The reason," she explains, "Is that with heavy usage, rubber may expand and the nipple may get bigger. So the next time you buy the same size, the new pacifier is smaller than the one you are using." Good to know.

Turns out, minimalism is standard advice that many seasoned moms give new moms. There is message board after message board of moms asking about how many pacifiers their new baby will use, and the advice is pretty standard: just get a couple. Their argument is that you don't know if your baby will favor a particular brand, and you won't know how often your baby will take it (maybe they're just a nighttime pacifier user).

But then there's other moms that suggest you buy at least a million because you're no doubt going to lose one or all of them.

Of course, its easy to forget that most pacifier brands offer different sizes for newborns than for older babies. So regardless of how many you want on hand, remember that you'll have to buy them all over again eventually, whether after three or six months, because the size of a newborn's mouth is much smaller than that of an older baby.

Pacifiers were once scoffed as unnecessary and perhaps even developmentally damaging for a child's tooth formation, but lately research is showing they are more beneficial than we once thought. In fact, many pediatricians are now encouraging parents to give our babies pacifiers for naps and nighttime because doing so has been scientifically proven to reduce the risk of Sudden Infant Death Syndrome (SIDS). One study even found that the use of a pacifier during sleep reduced the chances of SIDS by a whopping 90 percent.

Ultimately, the number of pacifiers you will need is up to your individual family's preference. You might decide you'd rather have one in every nook and cranny and if so, more power to you. However, if you're drawn to the minimalist route like I am, I'm here to say you really can get by with just one or two.