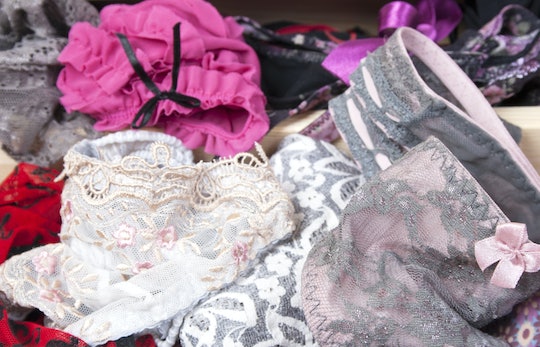 Here's How Many Pairs Of Undies You Should Actually Own, According To A Mathematician

Quick: how many pairs of underwear do you own right now? Yeah, I don't know either. But it may be worth counting, because keeping a big enough collection is important. Here's how many pairs of undies you should own and why, because running out of clean undies sucks. After all, your clean underwear reserve is what determines how long you can go between laundry days, and sometimes you need to stretch that time out.

For most people, around a three-week supply of underwear — say about 20 to 25 pairs — is ideal, according to mathematician and logician Presh Talwalkar. A week's worth forces you to do laundry too often and puts you at risk of running out entirely if one pair rips a seam. But something past the 20 pair mark lets you account for a broken washing machine or a long vacation here and there without much trouble.

So that's the ideal. What's the reality? Well, it doesn't look like there's a yearly census for underwear drawer details. But in general, an underwear drawer has 20 everyday pairs and 14 special pairs, according to a 2012 study reported in Elite Daily. In fact, it looks like the average person has even more in stock than Talwalkar suggests.

Of course, plenty of factors will affect your individual undies needs. Depending on your access to laundry facilities, you may want to keep even more pairs on hand. For several years, I lived in an apartment complex with an expensive laundry room full of broken-down machines. Even if you always had enough coins to run the machines, there was no guarantee any of them would be working. This would have been an excellent time to have a super-large undies collection. (My solution was to hand-wash stuff in the sink a lot, which is also an option.)

Next, it's important to consider your lifestyle when assessing your underwear needs. A person who's really into minimalism might be able to get by with only 10 pairs of drawers and a really strict laundry schedule. On the other hand, someone who travels frequently may want to stock up on pairs, just for a little peace of mind when it's packing time. It's personal.

That said, these are all just general ideas. Some lingerie enthusiasts love having a hundred pairs or more in their collection. Then again, other people have given up on the idea of wearing underwear entirely. But for most people, keeping about 20 pairs on hand will work well for your lifestyle.

As far as turnover rate goes, well, you might want to get some fresh pairs in the mix sooner rather than later. "Once the elastic is failed and they’re not staying in place and causing extra rubbing and shifting around, it’s time to throw them out and get some new ones,” said Melissa Piliang, MD, a dermatologist at the Cleveland Clinic to Health. If you tend to hold on to some pairs well past their prime, then it may be a good time to do a little spring cleaning. For sanitary reasons, the Good Housekeeping institute recommends that, "underwear should be thrown out every year for health reasons to reduce the risk of urinary tract and other infections," according to News.com. (BRB — guess I'm spending the rest of the day buying all-new unmentionables.)

Whether you prefer the finest lingerie you can find, whatever is available in a giant pack at Costco, or some combination of the two, it's wise to keep a few extra pairs on hand. Refreshing your stock at least once a year (or at whatever rate works for your budget) is also a smart move. With just a little bit of thought, you can make running out of clean undies a virtually impossible problem.