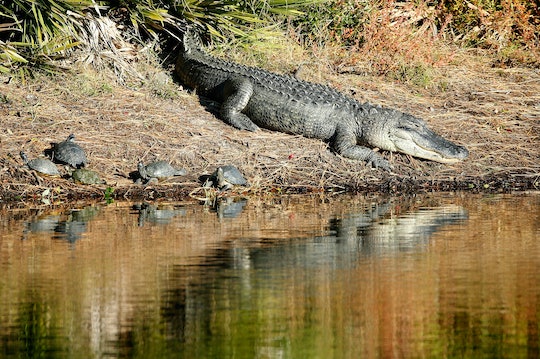 How Many People Are Attacked By Alligators Each Year? Keep A Close Eye On Your Kids

There are a lot of crazy, crappy things in this world, but alligators might be the worst. Sure, they are prehistoric predators that we should be proud to protect, but how many people are attacked by alligators each year? A lot, actually.

Not all attacks are fatal of course. However, on Wednesday, the body of a 2-year-old boy who had waded into a lagoon at Disney World was found after drowning post attack earlier in the week. The attack occurred after the boy wandered into 1 foot of water and was dragged under by the gator. According to the Florida Fish and Wildlife Conservation Commission, only one other alligator attack has been reported this year but wasn't fatal, though the person did require medical care. In 2015, there were nine alligator attacks in Florida, but thankfully only one of them was fatal. (Many victims of alligator attacks are able to make it to medical help before life-threatening or serious injuries can do any irreversible damage.)

So sure, there are bigger problems in the world. But that's still a lot.

Alligator attacks happen mainly in Florida, which is just one other reason to be wary of the southern state (I kid, I kid). The 2015 death of James Okkerse broke a long stretch of fatal alligator attacks in the state. The last stretch ran from 1979-1983, according to The Orlando Sentinal. The complicated thing about alligator attacks is that they aren't always classified as such since the animal can attack but harm the person in another way, much like the toddler this week. They don't technically get labeled as the cause of death. It's scary and sad.

But gators get anyone they can get. Compounding that fact, alligators are sneaky predators — they know just how to blend in to their environment and aren't thrilled when humans are snorkeling or splashing around their way. Or feeding them. According to the Florida Fish and Wildlife Conservation Commission, alligators are supposed to be scared of us. But if it's nighttime or there's food around? It's a whole different story.

Worse, many of the victims are children, if only because their size — yes, I know this is terrible — makes them easier to hurt. But don't cancel your Disney vacation just yet. In total, there have been 257 total attacks since 1948. Only 23 of them were fatal and of those 23, eight of the deaths were children. If you live in an alligator friendly area, there's a 1 in 2.4 million chance you would be attacked by these crazy, icky creatures.

Are they scary AF? Oh, for sure. But they've also been around this crazy planet for longer than we have. Just make sure you give them a little respect where it's due and step with extra caution to avoid any unnecessary encounters.