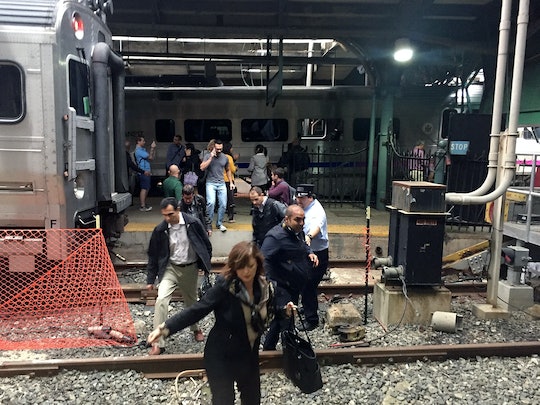 How Many People Are Trapped In The New Jersey Train To Hoboken? Hundreds Were Affected

Calamity struck on Thursday morning in New Jersey, as a commuter train entering the Hoboken Terminal smashed into the platform. According to initial reports, some 100 people were injured, and at least three were killed. But with authorities busy transporting the victims to nearby medical facilities and attempting to cut through the mass of debris, glass and collapsed roofing, how many people were left trapped on the New Jersey train?

Update: According to authorities, all passengers aboard the commuter train to Hoboken on Thursday had been rescued from the cars by just after noon, local time.

Early reports out of ABC News stated that the train had been carrying 250 people, and that "many" were trapped in the wreck, although the outlet was quick to note that passengers in the "second car and farther back" were able to climb off the train to safety. The crash affected those inside the first car and the station most seriously.

By mid-morning local time, it still wasn't immediately clear if any passengers were still stuck on the train, although with emergency responders pulling the injured from the wreck and dozens of other passengers "help[ing] each other off the train and onto the platform" and onto nearby benches to await assistance, according to Reuters, it's likely that most that had been located in the rear cars were able to exit the scene successfully.

The scene was nonetheless terrifying, with onlookers and eyewitnesses describing confusion on the collapsed platform directly after as apocalyptic. "There was so much blood," one woman repeated, in an interview with CBS reporters. Though the woman's husband, who had been walking to the platform at the time of the crash, was safe, she recalled seeing another woman lying on the ground with serious injuries to her legs.

Another woman, inside the train, told reporters that injured passengers inside the first car still managed to keep relatively level heads while assisting others in exiting the mangled train, despite being injured themselves. "There was no warning," she said, describing the crash.

Thankfully, the majority of those affected were not in grave condition. "They got on a bus and they walked in," a nearby New Jersey Medical Center spokesman said in a press conference Thursday, of most of the 40 injured passengers the hospital was treating. The spokesman explained that most had suffered non-life-threatening "lumps and bumps," though a handful of other patients were being treated for more extensive injuries, with at least three critical and eight more in "serious" condition.

While the incident was no doubt concerning, things could have been much worse, according to one woman, who had been in one of the rear cars. "There was just so much, a lot of people in need of attention," 62-year-old Linda Albelli told Reuters reporters. "There were a lot of people who were really hurt." Still, she added, the train typically carried more people but thankfully had not been full at the time of the incident, "because many passengers exit at Secaucus."