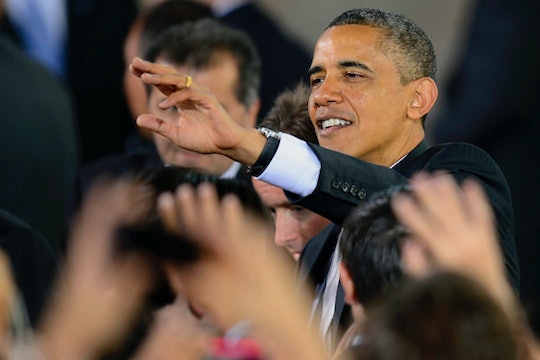 As President Barack Obama started to deliver his final address to the American people on Tuesday night, he was met with an overwhelming amount of cheers and applause from the crowd that immediately gave you goosebumps. So, how many people attended Obama’s farewell address at McCormack Place in Chicago? Demand was high and even though tickets to his final speech as the 44th President of the United States were officially given out free of charge — with thousands of people waiting in line for a chance to score one over the weekend — tickets for the historic event reportedly started selling for more than $5,000 on sites like eBay and Craiglist.

According to ABC News, White House officials didn't disclose how many tickets were given away over the weekend, but Chicago police said that anyone who was not in line before 7 a.m. would not be getting a ticket when tickets were distributed on Saturday, starting at 8 a.m.

"There will be a public ticket distribution for President Obama's Farewell Address at 8:00 a.m. CST on Saturday, January 7th at McCormick Place," according a White House information page on the event. "Tickets will be free, and one ticket per person will be distributed on a first-come, first-served basis. No one will be permitted to line up prior to 6:00 a.m."

While the White House didn’t say how many tickets were distributed in all, McCormick Place was packed on Tuesday night, which happens to be the nation's largest convention center with 1.2 million square feet of space on just one level, according to the center's website.

Photos of the tickets indicate that Obama's farewell address took place in the convention center's Lakeside Center space, which has 4,249 seats in total. And from the sounds and roars heard from the crowd that was in attendance, that number isn't completely unfathomable.

Other than the free tickets costing people more than ones to the Broadway hit Hamilton, photos and posts on social media also prove just how high the demand was to be in the presence of the Obama's final and historic remarks.

Some were worried even when they were able to wait inside:

Some didn't get so lucky:

After waiting in freezing temperatures for hours early on a Saturday morning, some were lucky enough to snag a prized ticket:

The dedication and determination shown in these posts (and the price some people were willing to pay) is just one more example why Obama will be missed so much when he leaves the Oval Office in a matter of days.