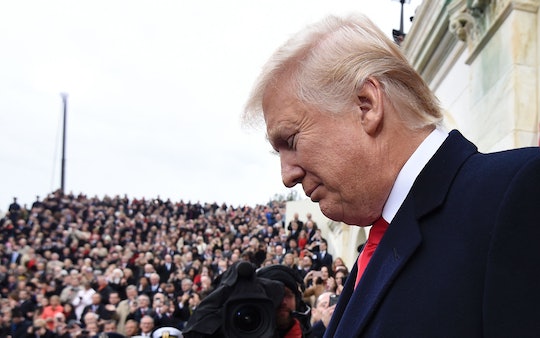 Trump's Inauguration By The Numbers

January 20, 2017 — a day which will live in infamy. On this day, Donald Trump was sworn into office as the 45th President of the United States. Though millions have dreaded this day since the night of Nov. 8, others have been looking forward to seeing a new leader enter the White House. In fact, some were so excited, they handed over hundreds to see Trump take his steps into office. But how many people attended Trump's inauguration? It wasn't a terrible turnout.

Regardless of who is being sworn into office, an inauguration is a pretty big deal. You are witnessing the start of someone's career as the highest position in the United States government. That being said, Trump's journey to the White House hasn't been a celebrated one. After Trump won the Electoral College on Nov. 8, millions have voiced their concern over the business tycoon holding such an important and powerful positions. There have been hundred of protests — some peaceful, some less so — and campaigns against the Trump presidency. But the voice of the people was not enough to change the mind of the Electoral College members. And so, Donald Trump officially because the President of the United States at 12:01 p.m. Eastern Time on Jan. 20. But the crowd at Trump's swearing in ceremony was much smaller than that of past presidents.

According to WRC-TV, an NBC affiliate in Washington, D.C., an estimated 800,000 people attended Trump's inauguration. That number, however, only includes the supporters. In an interview with The Washington Post, a representative from promotional group Destination D.C. said more than 1,000,000 people were present at the inauguration when you factor in the protestors and participants in Saturday's Women's March on DC.

Though many assume Trump had a low turnout at his inauguration, especially given that CNN reported a number of Democratic senators would boycott the event, it seems to be average when compared to inaugurations of the past. According to NBC Washington, former President Bill Clinton's 1993 inauguration had a turnout of 800,000 people. Former President George W. Bush, on the other hand, saw only 300,000 attendees at his firs inauguration. So when you think about it, Trump's crowd could be a lot worst.

The reason people think Trump had a subpar turnout is because of the man who came before him. Yes, I'm talking about the amazing former President Barack Obama. According to CNN, more than 1.8 million people attended Obama's first inauguration in 2009 and roughly 1 million attended the second inauguration in 2013. But the historical significance of Obama's election, not to mention the sheer love people had for him, helped draw in those big numbers. The only person who could have drawn in a similar crowd was Hillary Clinton.

The only people who see the 800,000 turnout as a problem are the ticket scalpers. According to New York Daily News, scalpers are having a hard time reselling their inauguration tickets. In an interview with the publication, 36-year-old Yossi Rosenberg said he bought a pair of tickets to Friday's event for $700 in hopes that he could flip them for a profit. But no one seems to be biting.

"I thought they would be in demand," Rosenberg said. "I got offers before I got them, but then I get them and everybody balked."

Regardless of how many people showed up to D.C. on Jan. 20, it was still a historical day and one that will be remembered for years to come.