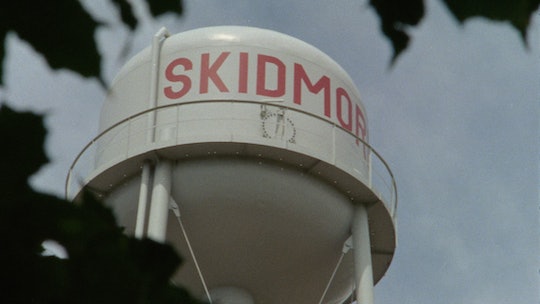 SundanceTV concludes its six-episode docuseries No One Saw a Thing Thursday night, but the mystery surrounding Ken McElroy’s murder is far from over. The crime was one that rocked the small, seemingly lawless town of Skidmore, Missouri, but not because of its brutality. It became a decades-long mystery that still hasn't been solved. Because the docuseries explores what some residents of Skidmore have to say about the crime today, some viewers are wondering how many people still live in Skidmore. No One Saw a Thing will leave you with tons of questions and I can't promise they will all be answered by the time the finale is over.

One afternoon in 1981, dozens of Skidmore residents rallied together to confront McElroy about his crimes. Most recently he had shot an elderly grocery store owner and been convicted, but quickly freed on bond.

When a gun went off during the confrontation with the townspeople and McElroy was left dead on the scene, no one confessed or gave up anyone else as the shooter. McElroy had been accused of many crimes throughout his life, including arson and cattle rustling, and had made enemies of everyone in town. The murderer could have been almost anyone among the crowd of people.

McElroy’s murder still hasn't been solved and, it seems, that was likely because of the efforts of the residents who made up Skidmore at the time.

But if Skidmore seems tiny in No One Saw A Thing, it's even tinier today. As of 2017, Skidmore had a population of 263, according to City-Data.com. That is more than a 23 percent decrease from 2000 and almost half the size of its 400-some population at the time of the murder. But small towns with small populations are common in Nodaway County, Missouri. The small town of Banard, which is also part of Nodaway County, had a population of 206 as of 2017 and Elmo had just 157 the same year. Clearly, small towns are par for the course in Missouri and Skidmore lands on the spectrum of exceptionally small in mass and population.

But this is no idyllic small town America. Even decades later, Skidmore still has a reputation for violent crimes. Some high profile crimes in Skidmore in the past 20 years include the murder of a pregnant woman, a woman who was stomped to death by her boyfriend, and the mysterious disappearance of a 20-year-old man.

Still, former Nodaway County Sheriff Ben Espey told CBS News in 2007 that he doesn't think everyone should believe or focus on the negative things they hear about Skidmore, even with a dark cloud like McElroy hanging over the town.

"It's just another small town, the same as all the others," he told the news outlet. "It kind of upsets me when I keep hearing McElroy this and McElroy that... This area is rolling hill farmland, a lot of common-sense people. Crime rates are low, drugs are as they are everywhere. But it's not near the issue it was five years ago."

No One Saw a Thing is about the mysterious death of McElroy, but it’s also about the people of this small town, and their vigilante justice.

No One Saw a Thing airs on Thursdays at 11 p.m. ET on SundanceTV.