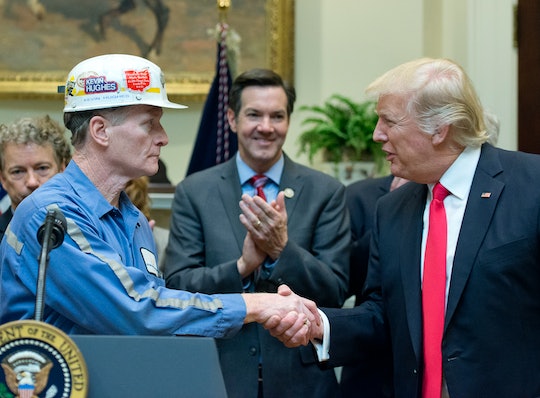 How Many People Work In The Coal Industry?

President Donald Trump drew criticism from international leaders Thursday when he announced that the United States would be pulling out of the Paris Accord on climate change. The unpopular decision is seen by many as being potentially devastating to the environment, but given Trump's campaign promises to protect American coal workers and "put the miners back to work," it's also not exactly surprising that he made it. The problem? Experts have suggested backing out of the accord won't revive coal jobs. How many people work in the coal industry? It has long been a dwindling sector.

In March, Trump signed an executive order designed to undo several Obama-era environmental regulations regarding American energy production. According to The Washington Post, Trump spoke in front of a crowd that included a number of coal miners, and called the move “the latest in a series of steps to create American jobs and to grow American wealth,” while promising that it would create more jobs for the coal sector. That was no doubt a welcome message to those in the audience: according to Fortune, Trump easily won the election in the top three coal-producing states, Wyoming, West Virginia, and Kentucky, where many have been counting on the president to follow through on his promise. In deciding to back out of the Paris Accord Trump said that the deal "punishes the United States," and claimed that it would "cost America as much as 2.7 million lost jobs by 2025," according to CNN. But anyone expecting a wave of new coal industry jobs might not want to hold their breath.

Why? One reason is because regardless of whether the United States commits to the Paris Accord, these days, there isn't actually much demand for coal in the first place. It's true that coal mining jobs have been decreasing over the years, but as The Guardian noted, most of the jobs were lost because of advancing technology and automation, not because of government regulation. The increased demand for natural gas and renewable energy has also made a major dent in the coal industry — something many insiders are saying will continue, regardless of Trump's political decisions. In fact, according to The Independent, The Institute for Energy Economics and Financial Analysis said in its 2017 U.S. Coal Outlook that it predicted jobs will continue to be cut, and that “too many companies are still mining too much coal for too few customers.”

What won't help matters further is that coal production has also been shown to have serious health repercussions. According to The Independent, studies have found that breathing pollution from coal emissions leads to a five times higher risk of death from heart disease than other types of pollution, thanks to the release of "a potent mix of toxins, including benzene, mercury, arsenic and selenium," that occurs from burning coal.

Perhaps most tellingly, even those with a vested interest in the coal industry aren't sounding particularly optimistic. In March, Robert Murray, founder and chief executive of the largest privately held coal mining company in the United States told The Guardian that, while he supported Trump, and hoped that he would "get the government out of picking winners and losers,” by eliminating subsidies for renewable energy, he didn't expect there'd be major job growth. Murray said, "I suggested that [Trump] temper his expectations. Those are my exact words. He can’t bring [coal jobs] back."

Given the way that Trump talks about his planned reinvigoration of the coal industry though, it might also be surprising to realize how relatively small it actually is — even compared to other industries that have similarly suffered over the years thanks to changing technology and decreased overall demand. According to The Washington Post, only 76,572 people were employed in the coal industry in 2014 — a number that includes office and sales staff, and all other non-mining coal industry roles, in addition to actual miners.

For comparison's sake, The Washington Post noted that similar numbers of people are employed by the bowling industry, or the skiing industry, both of which employed between 69,000 and just over 75,000 in the same year. Used-car dealerships, on the other hand employed 138,000 people in 2014. Carwashes? 150,000. In fact, travel agencies — an industry that the internet has made almost obsolete — actually employed more people than coal did in 2014, with nearly 100,000 workers.

To be sure, those numbers aren't likely to make much of a difference to anyone who actually relies on the coal industry for a pay check, and it would be unfair to suggest that their jobs don't matter. But given that it doesn't even seem entirely possible for Trump to score a massive victory for coal industry workers, it's concerning that his continued rhetoric about supporting coal workers could be having so much of an effect on government policy — including, perhaps, his decision to turn his back on reducing carbon emissions.

Despite the publicly stated disappointment from world leaders (including French President Emmanuel Macron and Canadian Prime Minister Justin Trudeau), Trump seemed to be sure about his decision about the Paris Accord, even reportedly opposing some members of his close inner circle (Secretary of State Rex Tillerson, chief economist Gary Cohn, and even his daughter, Ivanka Trump, were said to have opposed the decision, according to CNN). But not everyone disagreed: following the president's statement Thursday, Vice President Mike Pence said he supported Trump's decision, according to Business Insider, and claimed it "put American energy and American industry first" — including "the forgotten men and women," of the energy industry.