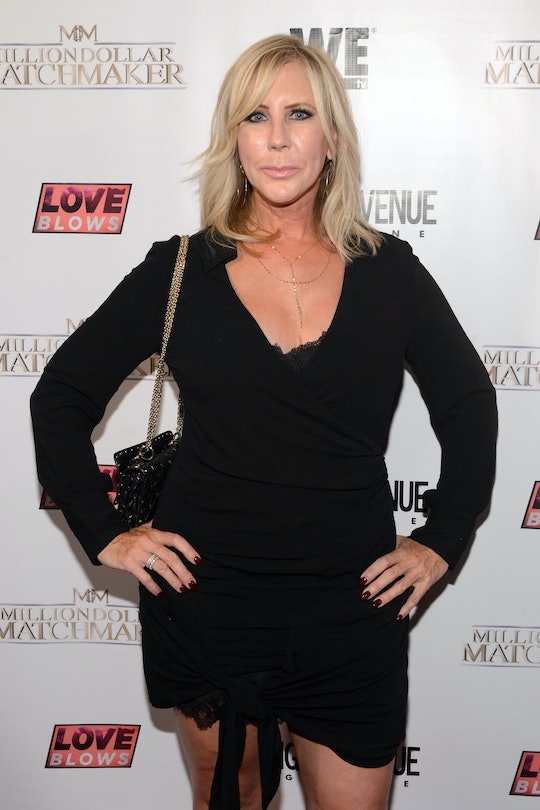 Vicki Has Had A Few Cosmetic Procedures On 'RHOC'

In the promo for the sixteenth episode of The Real Housewives of Orange County Season 13, Vicki Gunvalson lays in a hospital bed with her head bandaged up, asking boyfriend Steve Lodge if she's pretty. While the image may be an alarming one, don't worry — Vicki didn't get in an accident or anything. She had a cosmetic procedure, and it wasn't her first. But how many plastic surgeries has Vicki from RHOC had?

According to US Weekly, Vicki had a facelift on the advice of co-star Tamra Judge. She had been getting fillers regularly but was starting to feel like she wasn't herself anymore. "I had too many doctors, too many different times say, 'Let's do this, let's do that, let's fill here, let's do Voluma, let's do Sculptra,' and by the time I was done I looked in the mirror and was like, 'I don't even look like myself,'" she said.

Tamra suggested that Vicki have a facelift instead of continuing with the fillers, because she had had one herself a year previously. So Vicki decided to have a facelift shortly before the end of filming, which was captured for Episode 16. But while it was her most recent procedure, Vicki has always been open about her various plastic surgeries in the past.

Us Weekly reported that Vicki routinely got Botox injections from 2006 until 2016. Then in 2012 she had a few procedures: she had rhinoplasty that thinned her nose, got a chin implant, and had body fat injected into her face to reduce the appearance of wrinkles. In 2016, she had upper and lower eyelid blepharoplasty, which the Mayo Clinic describes as a surgery that removes "excess skin, muscle and fat" from around the eyes. She also had her breasts done at some point, according to People. That means Vicki has had at least six cosmetic procedures, plus Botox and fillers.

But it seems like Vicki is done with plastic surgery for the moment, and she's also stopped with injectables too. As she told Entertainment Tonight, "I promised [my boyfriend, Steve Lodge,] I'm done. I'm done." Though she was pleased with her lower facelift (which tightens the jawline and neck), she wasn't planning on getting anything else for a while.

I feel great. And I promised Dr. [Milind] Ambe — I love you so much! — I'm never doing another filler, another anything. I'm just leaving it alone, 'cause he said once you start doing that, it becomes, "I wanna do more and more and more and more." He said it was like granulated sugar underneath my skin, of all these different areas that had been injected. So, I didn't even look like myself anymore.

Though Vicki said she didn't feel like herself when she was getting fillers, now she just wants to return to "being a 56-year-old and looking the best I can be." It sounds like Vicki might be finished with plastic surgery for the moment, but viewers can see the whole journey Monday on Bravo.