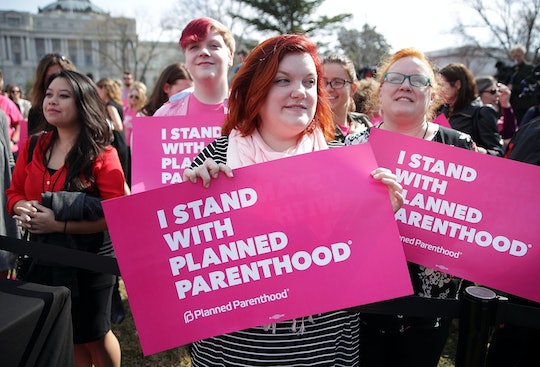 This week, the Congressional Budget Office (CBO) poured a gallon of kerosene onto the dumpster fire of debate surrounding the American Healthcare Act, a.k.a. Trumpcare. According to a budgetary analysis published on Monday, under Trumpcare, 24 million Americans could lose health insurance coverage by 2026. Worse, the analysis suggests that the most vulnerable populations will lose coverage at the highest rates, including pregnant women. But exactly how many pregnant women could lose health insurance under Trumpcare?

In order to assess how pregnant women might be affected by Trumpcare, the first place to look is Medicaid enrollment. Looking back to the days before the Affordable Care Act (ACA) became law in 2010, Medicaid enrollment was limited to low-income children, pregnant women, the elderly, and the disabled. The ACA expanded coverage to all low-income people, but it also strengthened coverage for groups that were already eligible — including pregnant women — by expanding the income thresholds. Under states that adopted the ACA's Medicaid expansion, pregnant women living at or below 200 percent of the federal poverty level are eligible, compared to the pre-ACA 133 percent cut off. According to a report by the Kaiser Family Foundation, "Medicaid expansions to pregnant women are credited with reductions in infant mortality and low birth weights as well as improved health outcomes for children."

The Medicaid income eligibility allowances for pregnant women are part of the reason that 45 percent of American births are covered by Medicaid, according to recent data from the March of Dimes and George Washington University. How might these numbers be affected by the implementation of Trumpcare? It doesn't look good. According to the CBO's report, under Trumpcare, there will be 14 million fewer Medicaid enrollees between now and 2026, a reduction of 17 percent.

Unfortunately, loss of Medicaid coverage isn't the only way that Trumpcare might negatively affect pregnant women. Trumpcare will also phase out the "essential benefits" protected by the ACA, which include prenatal care and maternity care. So it's not just that childbirth care would be inaccessible to low-income pregnant women; Rather, all insurance plans, Medicaid or otherwise, would no longer be required to cover prenatal, childbirth, and newborn care.

Yet another way that pregnant women could lose under Trumpcare is the defunding of Planned Parenthood. Surprisingly, the CBO report devoted an entire page to analyzing how the proposed cuts to Planned Parenthood would increase Medicaid expenditures over time because low-income women would lose access to birth control. As stated in the report,

By CBO’s estimates, in the one-year period in which federal funds for Planned Parenthood would be prohibited under the legislation, the number of births in the Medicaid program would increase by several thousand, increasing direct spending for Medicaid by $21 million in 2017 and by $77 million over the 2017-2026 period.

To be clear, this projected increase in Medicaid-covered births stemming from Planned Parenthood cuts is not because of reduced abortions. Under a 1976 law called the Hyde Amendment, federal funding for abortion services is prohibited, and thus Planned Parenthood uses federal funds for other services including STI testing and treatment, cancer screenings, and birth control. In its budgetary analysis, the CBO specifies that the Planned Parenthood cut would "affect services that help women avert pregnancies"—i.e., birth control. In chilling, straightforward language, the CBO report continues,

The people most likely to experience reduced access to [Planned Parenthood] care would probably reside in areas without other health care clinics or medical practitioners who serve low-income populations. CBO projects that about 15 percent of those people would lose access to care.

It's extraordinary that a relatively short, 37-paged CBO document about the financial costs of the so-called American Healthcare Act must devote an entire page to analyzing the federal budgetary burdens of unplanned pregnancies derived from cuts to Planned Parenthood funding — or, as a recent Quartz article puts it, "the obvious consequences of cutting poor communities off from what is often their only source of birth control."

For the sake of women in America, one should hope that this health care bill doesn't make it through Congress, at least not in its present state.