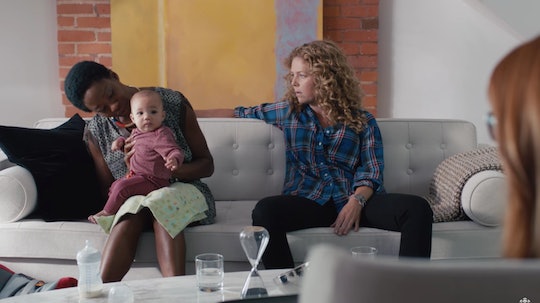 Netflix's 'Workin' Moms' Is Honest About The Difficulties Of Parenthood

Workin' Moms has been chugging along merrily on Canadian television for the past two years, but now it's about to go global on Netflix as an original comedy. Though the rest of the world will have to play catch-up, Canada has enjoyed a few seasons of the show already. But how many seasons are there of Workin' Moms?

The show has three seasons — or two and a half if you want to get technical about it. Two full seasons have aired on CBC Television, and Season 3 is already well underway. In fact, there have been five episodes of the third season so far, which has been airing steadily since its Jan. 10 premiere. The previous two seasons contained 13 episodes each, so Season 3 still has a ways to go. New fans have a lot to catch up on, though they might find themselves doing so on a little bit of a delay.

Season 1 of Workin' Moms debuts on Netflix on Feb. 22, but it's not entirely clear when the second and third seasons will join it. There might be a short gap between seasons since they're already done, but predicting the schedule ahead of the premiere is pretty impossible. If Workin' Moms is a hit with global audiences, then the entire series could end up on Netflix sooner rather than later.

For those not in the know (i.e., anyone living outside the Great White North), Workin' Moms is the creation of actress Catherine Reitman, who also stars as Kate. She was inspired to write about the work/life balance that many moms have to navigate after going through the struggle herself. She told Chatelaine that she went on an emotional rollercoaster upon returning to work after the birth of her eldest son. She wanted to work, but she also felt guilt and shame about it. Workin' Moms is honest about the hardships of motherhood, but it also finds unexpected comedy in exploring them.

And Reitman wanted to push things further after Season 1. In an interview with The Huffington Post, she said that she was even prouder of the second season because it "really went there." (Degrassi fans know that Canadian TV has a talent for "going there.") The characters had difficult decisions to make and setbacks to weather, like choosing between job opportunities and childcare. They had to find time for their partners when they were already stretched too thin. That may resonate with plenty of parents in the audience.

As Reitman told HuffPo about the second season:

In addition to Kate, the show follows the trials and tribulations of psychiatrist Anne (Dani Kind), real estate agent Frankie (Juno Rinaldi), and office worker Jenny (Jessalyn Wanlim). They've dealt with a variety of issues over the 31 episodes of Workin' Moms, but don't worry — I won't spoil things before you get a chance to see for yourself on Netflix.