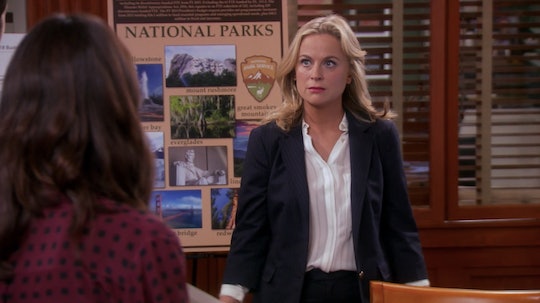 The 10th Anniversary Of 'Parks & Recreation' Is Coming Up Soon

Comedy Central is introducing Parks and Recreation to its lineup with a marathon on Martin Luther King, Jr. Day. That means you have the entirety of Jan. 21 to revisit one of your favorite sitcoms (or discover it for the very first time). While quite a few episodes will be airing over the course of the day, there are simply too many seasons of the show to manage a series rewatch in 24 hours. But how many seasons of Parks and Recreation are there?

There were seven seasons in total. The show premiered on NBC in April 2009 and concluded in February 2015, resulting in 125 episodes. At roughly 21 minutes an episode (had to leave time for those commercials!), it would take a couple of days to work through all of them — and that's provided you didn't sleep at all while you watched. The Comedy Central marathon will make it all the way through the fifth episode of Season 3, which is no small feat. After that, you can catch reruns throughout the week on Comedy Central. You can also watch select episodes on the network's website and on their app. But those aren't the only options if you're in need of more Parks and Recreation.

The show has been off the air for several years, but its easy availability may have made it feel like it was never gone at all. Comedy Central just joined in the Parks-a-palooza, but reruns have previously aired on FXX and E!. The show is also streaming on Netflix, Hulu, and Amazon Prime. With so many different ways to watch, fans should be able to keep the Parks and Recreation marathon going for as long as they like.

And now's the perfect time to catch up, because the show is fast approaching its 10th anniversary. To celebrate that, the entire cast and crew will be appearing on a panel at the 36th annual PaleyFest, the TV festival held by the Paley Center for Media in Los Angeles every year. Star Amy Poehler and series creator Mike Shur shared a joint statement with Entertainment Weekly that expressed just how excited they were about it. "We're thrilled to be reuniting at PaleyFest," they said. "And truth be told, we were all hanging out already anyway, so carpooling will be easy."

Though seven seasons is a respectable amount for any network sitcom, some viewers would surely be delighted to see a revival add a few more episodes to Parks and Recreation's already impressive number. And there may be a possibility for that. During an appearance on Ellen in 2018, Poehler said that she would be down to reprise her role as Leslie Knope and felt confident that her co-stars would want to come back, too. "I know, I'll speak for everybody and say we would all do it," Poehler said, according to IndieWire. "I think we'd all do it someday. It would be amazing."

Nothing has been announced, nor do there seem to be any concrete plans in the works to bring back Parks and Recreation. But revivals are all the rage these days, so if all the stars aligned in a few years, there's a chance fans could be seeing the old Pawnee crew back together again. At the very least, it's not a totally impossible idea.