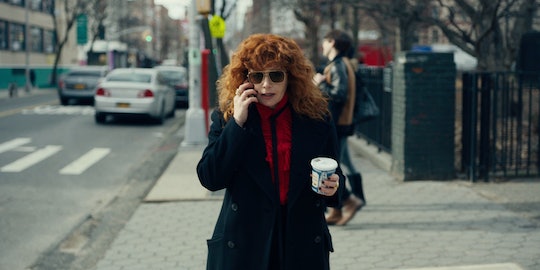 Natasha Lyonne *Could* Live Again In Season 2 Of 'Russian Doll'

If you've ever experienced déjà vu then you understand that 'I've been here before' feeling. But what if the déjà vu was literal and every day you experienced your own death over and over again? Yep — in the latest Netflix series, Russian Doll, Natasha Lyonne plays Nadia, a character living this freakish nightmare where she dies on her 36th birthday on repeat. If you're trying to calculate how many times Nadia dies in this show, you're probably wondering how many seasons of Russian Doll there are, then how many episodes there are in a season, and of course how many times she kicks the can in an episode. What I'm saying is it's a lot of death. How many seasons can you get out of this type of storyline before it dies out? (Pun intended.)

As of this moment, Russian Doll only just premiered on Netflix, and it's still unclear whether the streamer will scoop up Russian Doll for Season 2. Sorry — I'm sure that's not what you want to hear and I wish I had a more definitive answer, but showbiz has its own timeline. The good news is, Netflix doesn't always announce another season for its shows at specific times, so it's not out of the realm of possibility that the Russian Doll will garner enough steam that another season would be warranted — or even necessary — due to viewer demand. Netflix is one of the few online streaming platforms that prefers to see how beloved a series becomes over time. It is, after all, a business and every show is a risk no matter what big names are tied to it. Netflix has to make sure their bottom line lands in the green — whether Russian Doll has more story left after the first eight episodes in Season 1 or not — but it'd also be pretty stellar to know if you should invest in the storyline or not. Who wants to get attached to a show that won't return?

The great minds behind the show, creators Amy Poehler, Leslye Headland, and Lyonne, have a great concept. Although it is not dissimilar to some other shows and movies over the years (Groundhog Day anyone?). And like on the movie franchise of Happy Death Day, the main protagonist must relive her death on a loop no matter what she changes. But a key difference in Russian Doll is when Nadia finds someone else going through the same things. This show has some twists you won't see coming and the eight-episode season leaves a lot of unanswered questions and the story feels a little too big for just one season. Hear me, Netflix?

With all of that said, Netflix has a history of being generous in the second season department before they decide a show's not worth the investment any longer. But don't take my word for it (because Netflix can do what Netflix wants and absolutely could cancel Russian Doll without renewing). Watch the available episodes and judge for yourself. Shows with a fanbase and dedicated viewership are generally the ones that get picked up for subsequent seasons. Of course, as the saying goes, nothing in life is guaranteed except death and taxes and Russian Doll has the former covered.