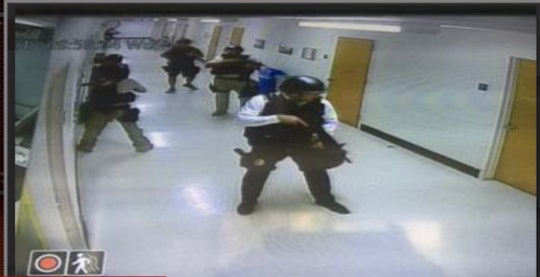 How Many Shootings Have There Been At UCLA? The Last Was In 1969

Although school shootings seem to happen all of the time, the location of the most recent incident is a relative stranger to them. In the past few decades, there surprisingly haven't been many shootings at UCLA. In fact, apart from the murder-suicide and subsequent lockdown on the campus this Wednesday, the last and only shooting at the University of California, Los Angeles was in 1969 — a shooting which became remembered as one of the most historic moments of the Black Panther movement at the time.

On January 17 of that year, two members of the Black Panther Party were fatally shot during a meeting where they and an opposing African American student groups were sparring over a new black studies department that was starting off at the university. Alprentice "Bunchy" Carter, the founder of Southern California's Black Panther chapter and member John J. Huggins Jr. were killed in the shootout.

According to The New York Times, the next day seventeen members of the Black Panthers were arrested at the house of one of the victims. Since it was 1969, the paper of record only identified the house as belonging to one of the "Negroes." Later, three men were arrested for the shooting. They all belonged to the United Slaves Organization, allegedly, a group that differed in some philosophical points from the Panthers.

Claude "Chuchessa" Hubert was named as the shooter and never apprehended. But two other men, brothers George and Larry Stiner were arrested for conspiracy to commit murder and second degree murder and were given life sentences. They both escaped prison later on. Larry, who now goes by Witani, was captured in South America years later and served 46 years in San Quentin, before being released. His brother George is still a fugitive, if he's still alive.

It's a crazy story and one that really shows how contentious the environment was, on campuses, and throughout America, during that decade. Recently, students at the Westwood campus of UCLA have memorialized the two victims of the shooting at Campbell Hall, where the shooting took place decades ago. At the dedication of the plaques, witnesses of the shooting spoke about the events of that day.

J. Daniel Johnson, who according to The Los Angeles Times, is now a family therapist in Santa Monica, said that there were about 15 people in the room, gathered to discuss who would be named as chair of the black studies program and talk about assigning a "balanced advisory committee" for the department.

"After a scuffle between John and Tuwala, Chuchessa shot John in the back. Then Bunchy tried to take cover behind a chair and Chuchessa shot through the chair and killed him instantly," he said. Other witnesses were also armed that day. After the shooting, there was a lot of controversy about whether there was a gunfight at all, who shot who, and a lot of back and forth between the various black national and separatist groups on campus.

A documentary called 41st and Central: The Untold Story of The L.A. Panthers chronicles the organization of the Southern California chapter of the Panthers under Carter and their disputes with the U.S. Organization up until and after the shooting at UCLA. It's hard to find in full but is worth some illicit streaming if you feel like you need a history fix. It wasn't that long ago, but it can feel like entirely different planet.

Universities are supposed to be a safe places to have conversations, which makes the 1969 shooting and Wednesday's murder-suicide (though there is still no official motive for the shooting) so hard to comprehend. Let's hope that, going forward, that largely nonexistent pattern of mass violence on UCLA's campus continues.