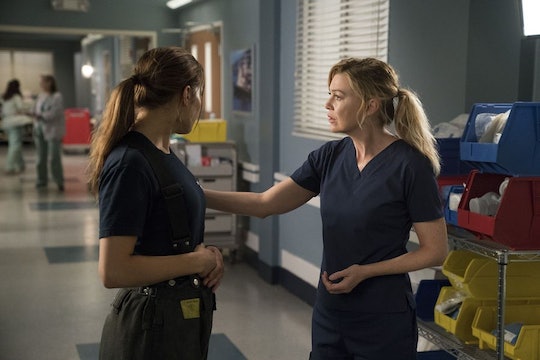 Station 19 is yet another Grey's Anatomy spin-off, but unlike its predecessor, Private Practice, Station 19 will take place only three blocks down from Grey Sloan Memorial Hospital, thereby making the door for crossovers wide open. Based on the trailer, it's already clear Meredith Grey will be in at least one episode of the new series, but exactly how many Station 19 episodes will Meredith be in? It's hard to say for sure.

Meredith, played by Ellen Pompeo, is set to appear in the first episode of the season. When the series begins, Andy's father, Pruitt, will get hurt on the job and will need to be taken to Grey Sloan Memorial Hospital. Meredith, who met Andy in the backdoor pilot, will help Andy get through the situation by pulling her aside and telling Andy to "put your game face on," as can be seen in the promos.

Besides meeting again at the hospital, according to TV Guide, Meredith will also drop by the firehouse at some point. It's unclear if this will be in the same episode or not, but at least fans know Meredith will definitely be in at least one episode this season. The first season of Station 19 is only 10 episodes long and it would make sense that Meredith's presence would be somewhat scarce, since the show probably wants to stand on its own and make a name for itself without constantly being tied to Grey's.

So while it's always nice to see Meredith for a bit longer than just an hour for Grey's, for this first season of Station 19, the focus should really shift to Andy, who's the star of the series. That being said, there will be another Grey's star popping up on Station 19, although this one is much more understandable. Dr. Miranda Bailey will also be in the first episode of the series, alongside Meredith. Bailey is married to Ben Warren, who left the hospital to become a firefighter and is now starring in Station 19 alongside Andy.

Although it hasn't officially been said how often Bailey will show up in Station 19, actress Chandra Wilson (who plays the character) told TV Guide that, "Ben and Bailey are husband and wife who now work in separate places and we get to explore what that looks like through both shows." So it seems that Bailey will most likely be in more episodes than just the premiere, but again, the focus of Station 19 will probably be the main characters of the show, not the Grey's guest stars. Still, I wouldn't mind seeing Bailey pop up here and there; someone has to keep Ben in line.

Besides Meredith and Bailey, it seems unlikely that other Grey's character will make special cameos since they don't really have a reason to be there. Meredith has a connection to Andy and Bailey is obviously married to Ben, but otherwise, the rest of the doctors at Grey Sloan probably don't know the firefighters and vice-versa. But then again, who knows? The fire station is only three blocks away from the hospital. It's totally plausible that the doctors and firefighters bump into each other from time to time. Plus, as was seen in the back door pilot, there's obviously crossover potential between their two jobs.

Regardless, if there's only the one crossover in the premiere or multiple crossovers throughout the first season, Station 19 looks like it'll be another hit for Shondaland and Grey's fans can't wait to see it. You can catch the premiere of Station 19 on Thursday, March 22 at 9 p.m. EST on ABC, right after a new episode of Grey's Anatomy.