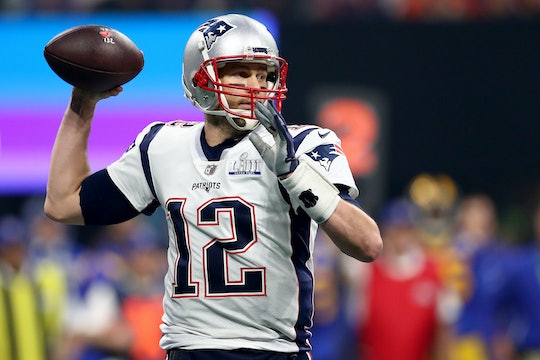 Here's How Many Super Bowl Rings Tom Brady Now Has

It's official: The Patriots won the 2019 Super Bowl (yes, again). Superstar quarterback Tom Brady is basically synonymous with the New England Patriots, but some may be wondering, just how many Super Bowls has Tom Brady won? Because, of course, on Sunday night, he claimed victory once again.

As of Sunday night, Brady has won six Super Bowls. Now, that may or may not seem like a huge number, but it's a pretty big deal. As Sports Illustrated reported, Brady began game day tied with pass rusher Charles Haley for most Super Bowl wins by a player with five apiece, but he moved into the lead once the Pats claimed victory in 2019. That's right, Brady has officially won more Super Bowls than any other player. There's a reason why Patriots fans love him as much as they do.

Brady won his sixth Super Bowl ring after beating the Los Angeles Rams, but what you may not know is that he won his first ring after the Patriots beat the Rams as well, per Sports Illustrated. That victory came in just his second season of professional play. So Brady has been a good player on a good team for quite awhile (though you likely already knew that).

Brady doesn't only hold the record in Super Bowl wins, however, he's also the record-holder in a number of other Super Bowl-related stats. According to SB Nation, Brady also holds the records for most Super Bowl appearances, most passing touchdowns, most passing yards, "oldest quarterback," (Brady is 41), and more.

Brady doesn't seem to be ready to call it quits on his football career just yet, though. After the game, Brady told CBS's Tracy Wolfson that winning Super Bowl LIII "doesn't change anything" for him (he's previously said he wants to play until he's 45, per Wolfson). He then told her that he's ready to spend some time with his family now that the busy season has come to an end.

And, according to Brady's Instagram account, many, many family members made the trip to Atlanta to watch Brady compete and break some records along the way.

Regardless of how you feel about the Patriots (or Brady himself) — and people tend to have feelings — it's pretty hard to deny that he firmly cemented his superstar status on Sunday night. After all, even star football players and faces of franchises (which Brady assuredly is) don't know what it's like to do what Brady has done. Now fans and haters across the country will have to just wait and see if Brady can stay in the game as long as he likes or if he's headed for a premature (in his mind, at least) retirement. After all, 45 is only a few years away.