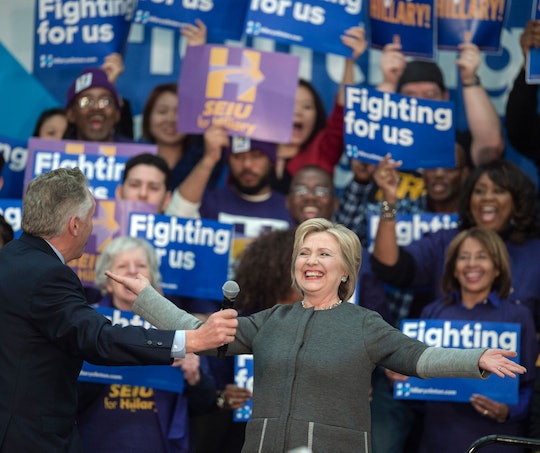 How Many Superdelegates Does Hillary Clinton Have? Things Are Looking Great For Her So Far

Super Tuesday is here, which means Americans are about to get a clearer picture of who might be chosen as their presidential candidates. But, this is America, which means that our voting process is incredibly complicated and convoluted. We were all reminded 16 years ago that the popular vote, aka the actual vote of the American people, didn't really count for squat. Instead, the choice between former Secretary of State Hillary Clinton and Vermont Sen. Bernie Sanders will be decided by delegates, about 15 percent of which are superdelegates. So what the heck is a superdelegate, and how many does Clinton have? Short answer: it's a person who very well might decide the nomination, and she's got a ton.

First off, lets talk delegates. A delegate is a local political leader who's generally awarded to each candidate based on how many votes they get. The Democratic candidate who secures at least 2,382 out of 4,763 delegates will eventually become the party's nominee. But then there are the superdelegates, who are unbound, meaning they don't have to go along with the popular vote at all. This group is made up of members of the Democratic National Committee, members of Congress and governors, former presidents and vice presidents, former leaders of the Senate and the House, and former chairs of the DNC.

Stay with me! This is a big deal. In a tight race (like Clinton's last go-round against then-Senator Barack Obama), they can really make a difference. And if it's up to them, 2016 is looking like Clinton's year. There are 712 Democratic superdelegates, and while they haven't all weighed in yet, 455 (as of press time) are Team Hillary, according to The New York Times. Sanders, on the other hand, only has 22. That leaves 235 to go, and even if Sanders somehow scored them all, math whizzes will recognize that it's still not enough.

Bummed out voters who are feeling the Bern shouldn't give up just yet, though. Like I said, superdelegates only account for 15 percent of total delegates, which is significant, but it doesn't neccessarily mean that they'll decide the nominee. The other 85 percent are required to go along with the party's vote, which means that voting really does matter. Voters in Alabama, Arkansas, Colorado, Georgia, Massachusetts, Minnesota, Oklahoma, Tennessee, Texas, Vermont, and Virginia can really make a difference on Super Tuesday. Polls are open until at least 7 p.m. (later in some states), but do try to show up before they run out of those cool "I Voted" stickers.