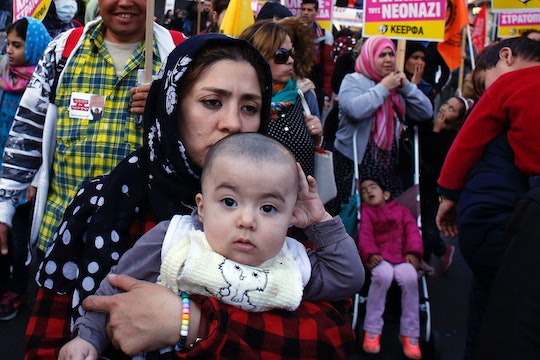 How Many Syrian Refugees Has The US Admitted?

On Thursday, President Donald Trump ordered the launch of nearly 60 missiles at a Syrian airfield, saying that "no child of God should ever suffer such horror," according to The Telegraph. But Trump has been trying to turn Syrian refugees who have been enduring "such horror" away for a while now, and since the United States' military strike yesterday, he hasn't said anything to suggest that he will now stop trying to bar Syrian refugees' entry into the country. Due to Trump's opposing statements, many people are wondering just how many Syrian refugees the United States has admitted under Trump's administration, and if Trump plans to allow more refugees in now that the United States' role in Syria has intensified.

Since his inauguration in late January, Trump has tried not once, but twice, to ban Syrian refugees from entering the United States. When Trump's first executive order banning Syrian refugees was blocked, he tried to push a second ban through, only to have it stayed by a federal judge. According to The Guardian, the Trump administration has suggested it will be fighting that temporary stay.

Luckily for the 1,347 Syrian refugees who have made it into the United States since Trump's administration — more than 40 percent of them under the age of 14 — Trump's orders banning refugees did not stick. And overall (in the period of time since the civil war began in Syria in 2011 until the end of 2016), the United States accepted a total of 18,007 Syrian refugees, according to the Migration Policy Institute.

The question is, refugees' need for a safe haven has been urgent ever since the Syrian conflict began six years ago, so why has Trump suddenly had a change of heart? According to The New York Times, Trump said that the chemical gas attack carried out in southern Syria had "a big impact" on him, telling reporters that the attack crossed "a lot of lines." But the world has been seeing horrifying images come out of Syria's civil war for a long time now, including the Ghouta chemical attack in 2013 that killed hundreds. After that attack, Trump tweeted:

AGAIN, TO OUR VERY FOOLISH LEADER, DO NOT ATTACK SYRIA - IF YOU DO MANY VERY BAD THINGS WILL HAPPEN & FROM THAT FIGHT THE U.S. GETS NOTHING!

Two days later, Trump tweeted again: "President Obama, do not attack Syria. There is no upside and tremendous downside. Save your 'powder' for another (and more important) day!"

Regardless of what side a person falls on — whether they believe the United States was right to attack Syria on Thursday or not — it seems hard to reconcile Trump's sudden concern for Syria's "beautiful little babies" with his past views on those same babies. If Trump truly believed the Syrian government deserved to face repercussions for using chemical gas on its own people, or if he was actually concerned about the children hurt by Syria's civil war, he wouldn't have spent his first few months in office trying to keep those same children out of the United States or criticizing President Obama for wanting to retaliate.

Many people have pointed out that Trump's sudden change of heart seems a little hard to swallow. With any luck, however, whatever drove Trump to authorize airstrikes against Syria on Thursday will now also move him to drop his refugee bans.