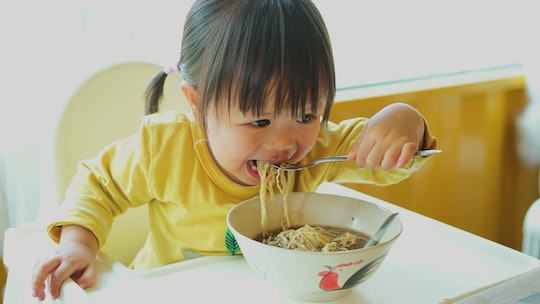 Surprise: Your Kid Needs To Try A Food 20 Times Before You Can Give Up

I am the mother of two very picky eaters. I worry over every meal I make, wondering if it's all going to end up in the bin, or if by some miracle, my children decide it's worth eating. I've been advised on multiple occasions that children need to be exposed to foods over and over again before they develop a taste for it, but how many times does a child have to try a food before they like it? Some experts say around 20 times, but that seems excessive even to me, and I've given up yoga dozens of times.

How Often Should You Introduce A New Food To A Toddler?

Regardless of how many meals that sounds like, research completed by Healthy Families British Columbia wrote that children need to be exposed to a food at least 12 times, but up to 30 times before they truly decide whether or not they don't like the food. Researchers wrote that it is important that children are given the opportunity to interact with the food — see it, touch it, smell it — in different iterations before they make their final decision.

It seems a steep mountain to climb. Generally, if my children don't like a food, they will do anything to avoid it. For my daughter, tofu is her Kryptonite. It's one of those foods that is a staple in the diet of the rest of our family, but she will pitch an absolute fit if we try to make her eat it. Just last night I made a delicious curried tofu with chickpeas and collard greens over rice, and while the rest of the family gobbled it up, she proceeded to extract each cube of the offending article with surgical precision, leaving only the coconut curry sauce and greens atop the fluffy white rice.

It’s enough to make me never want to serve tofu to her again. But consistency is important, and the more she sees tofu, the more she may be willing to try it out. Imagine getting your favorite meal — chicken nuggets and french fries, perhaps — at least three times a night and then suddenly it’s replaced with eggplant parmesan. Something you’ve never tried, and haven’t seen in months. You were expecting nuggets and fries — it’s enough to throw anyone off of a new food before they’ve even tried it.

Is Picky Eating Common For Toddlers?

Leann Birch, a research psychologist with the University of Georgia, told NPR that children often react poorly to new foods, and "that's really just an inbuilt response to something that's new." She said that as long as you aren't physically forcing your child to try new foods, but instead offering all different sorts of flavors, ranging from sweet to spicy to sour, and even bitter, "they typically will learn to eat a lot of new things."

Occupational Therapist Judy Delaware and Registered Dietitian Nutritionist Megan McNamee of Feeding Littles tell Romper that this is common, and that parents shouldn't be put off by the number of times that they introduce foods to children, even if it seems like a lot. "Some babies or children won’t touch new foods until they have seen them at least 20 times," the duo say. New foods are fun and exciting for kids, but they can also be off-putting and strange.

Additional Ways To Improve Your Child’s Interest In New Foods

However, science has given us a clue as to how we can improve our children's interest in new foods. Another NPR article reported that there is a "flavor window" between ages 4 and 7 months that children are the most likely to be receptive to new foods and textures. After this window, children become more unwilling to try new foods. It's extremely helpful for parents to introduce a wide variety of foods during this period, so that when the combinations of these foods and other similar foods are introduced later, children may be less hesitant to try them.

Additionally, it’s important that you model the behavior you want your children to have when trying new foods. A study published in the Journal of the American College of Nutrition found that mothers who showed they didn’t want to try a new food had children who refused new foods.

It's true that your kid needs to try a food up to 20 times before you can give up, and it is equally true that this is a pain in butt. But it's absolutely worth it.

More Like This
14 Recipes For Sick Kids When Everyone's Tired Of Canned Soup & Crackers
13 Is "Too Early" For Kids To Be On Social Media, Surgeon General Cautions
35 Children’s Books Starring Black Characters
These 72 Instagram Captions Are Perfect For Your Snow Day Pics
What Parents Are Talking About — Delivered Straight To Your Inbox