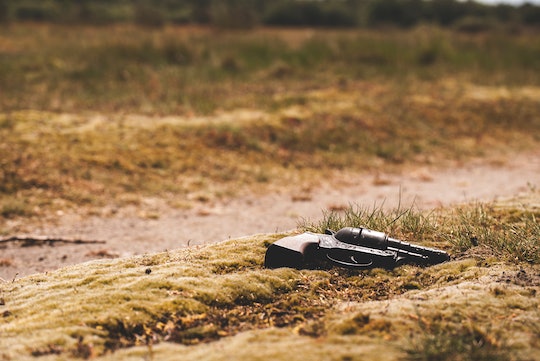 How Many Toddlers Have Shot Someone This Year?

Statistically, a 2-year-old poses more of a threat to the average American than sharks or lightning, and I'm not talking about the threat of peeing on the carpet. When you add up how many toddlers have shot someone this year, you'll wish we could lock up everybody under age 4. Or we could just lock up our guns, maybe? Nah, that's crazy talk. In January, Metro published the shocking headline "A toddler has now shot someone every week for two solid years in America." They got that figure by averaging the total number of toddler shooters in 2015 and 2016 combined, as compiled by The Washington Post. And it looks like 2017 is well on track to keep that trend going.

Based off of news reports, I was able to identify 25 incidents in the United States this year involving a toddler accidentally discharging a gun and injuring or killing themselves or someone else. Of those, 16 shot themselves and 11 shot another person (some incidents had multiple victims). The shootings resulted in at least seven deaths, though in some cases, the condition of the victim is unknown. In many cases, adults faced charges, but they ranged anywhere from a misdemeanor to felony manslaughter. Some responsible adults faced no charges at all.

In January, a North Carolina police officer's 2-year-old pulled his off-duty weapon out of a bag that was left on the floor and shot his mother in the buttocks. The father faced a misdemeanor charge. In California, a correctional officer was charged with felony manslaughter and felony child abuse after her 3-year-old daughter accidentally shot and killed her 1-year-old brother.

In February, a South Carolina 3-year-old accidentally shot and killed himself. A Louisiana police officer's toddler of an unspecified age shot their 11-year-old brother in the legs, and the mother was put on paid administrative leave. A Georgia 2-year-old injured his 11-year-old sister when he found a gun in his mother's purse, and she was charged with reckless conduct. A Tennessee grandmother was charged with child abuse and neglect after a 3-year-old in her care dropped a gun, which discharged into his 4-year-old sister's arm. A North Carolina 2-year-old shot himself in the chest with a gun he found in his father's truck. He recovered, and the father was charged with failure to store a firearm to protect a minor. Just days later in South Carolina, a 3-year-old also shot himself with a gun found in his parents car. They were charged with unlawful neglect of a child. The boy's condition is unknown.

In March, an Ohio father was charged with tampering with evidence, endangering the welfare of children, obstruction of justice and receiving stolen property after he allegedly tried to cover up the shooting of his 1-year-old at the hands of his 3-year-old. The child was in critical condition following the shooting, her current condition is unknown. In Texas, a 3-year-old shot himself and another 3-year-old in a Chuck E. Cheese parking lot with a gun found in his parents' car. The injuries were not life-threatening. An Arizona mother was charged with four counts of child abuse after her 2-year-old found a gun on her bed and fatally shot a 9-year-old. And a North Carolina 2-year-old fatally shot himself in the head (it's unclear if charges were filed).

April was relatively slow; a Texas man was charged with criminally negligent homicide after his 2-year-old fatally shot himself in the head, a 4-year-old required surgery after being shot by a 3-year-old (no charges), a Nebraska 2-year-old shot a 1-year-old in the head (no further details were available), and a Mississippi 3-year-old died of a self-inflicted gunshot (no charges).

There are 11 states that have some kind of law related to using devices to lock up firearms. Unfortunately, Massachusetts is the only state that requires guns to be locked away when stored, according to the Law Center to Prevent Gun Violence. If you want your state to enact legislation that requires guns to be stored with a locking mechanism, contact your representative here.

You can also purchase a gun lock on Amazon for less than $10. I think that's a pretty fair price to save a toddler's life.