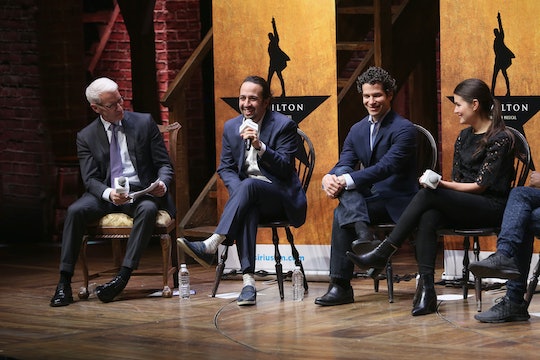 How Many Tonys Is 'Hamilton' Nominated For? It Is A Total Sweep

If you haven't heard about Hamilton, the hottest musical on Broadway right now, you've probably been living under a rock. If you've heard about Hamilton and haven't listened to the soundtrack yet, you're basically committing an act of treason at this point. Hamilton, the musical-to-beat at this years Tonys. Lin-Manuel Miranda's hip-hop musical about Alexander Hamilton has stolen the hearts of many, making it a front-runner at the Tonys, evident by its numerous nominations. So, just how many Tonys has Hamilton been nominated for?

Told from the point of view of Aaron Burr, played by Leslie Odom, Jr., Hamilton's first friend and later enemy, the musical follows the life of Hamilton, played by Miranda, from the time he arrives in New York to his death at the hands of Burr himself. If the idea of seeing Founding Fathers rapping their way through the American Revolution and cabinet battles doesn't entice you enough, the idea of the Schuyler Sisters, the Destiny's Child of the 18th Century, will probably hook you. The group is compromised of Phillipa Soo as Elizabeth Schuyler, Broadway vet Renée Elise Goldsberry as Angelica Schuyler, and Jasmine Cephas Jones who plays double duty as Peggy Schuyler and Maria Reynolds. In other words, it's really just a trio filled with Beyoncés.

Hamilton has become a Broadway hit, winning a Grammy and a Pulitzer prize, and most recently sweeping the Tony Award nominations with a record breaking 16 nominations.

Miranda's historical, hip-hop musical with a cast that mostly consists of people of color, continues to shatter records and is still sold out through January 2017. To say Hamilton is a success would be an understatement.

More Like This
Anne Heche Remembered As "Loving Mother" To Her Two Sons After Her Death At 53
Your Disney+ Subscription Is About To Get More Expensive
Dan Levy Just Proved He's The Ultimate Uncle With This Perfect, Sweet Answer
Netflix’s New Animated Kids’ Show Deepa & Anoop Stars A Color-Changing Baby Elephant