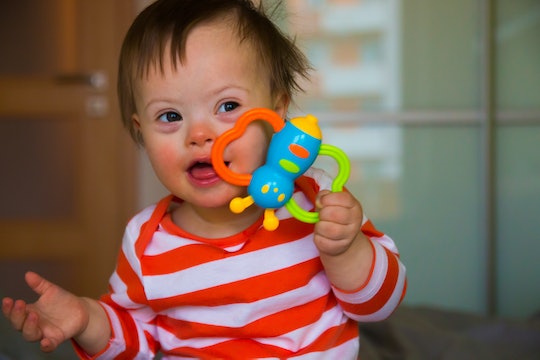 Here's How Many Toys Your Baby Should Have, According To Science

In your baby's first months, the last thing on your mind is how many toys he or she should have. You're dealing with more diapers and feedings than you've ever thought possible, and you're doing it on less sleep than should be physically feasible. But when your baby gets to be a few months old and starts doing more than eating and sleeping, toys quickly start to multiply. So, how many toys your baby should have? Turns out, there's a scientific answer that can help you quickly stop the toy influx before it takes over.

Your baby should have three to five interesting things to play with, according to Houston-based social worker and psychotherapist Vicki Sherman, who has extensive experience treating and working with babies and children through play therapy. In an interview with Romper, she explained, "Your baby doesn't have to have 10 toys. Three to five interesting things to look at and feel is definitely enough." Sherman also shared that babies don't necessarily need toys that are specifically sold as toys. Instead, tupperware, balls, pots, and pans can all serve as a baby's toys.

So, what should you be on the lookout for when you're collecting a basket of toys for your baby can play with? "Toys that are tactile," Sherman says, "and not just stuffed animals, but things with texture and color." Other qualities that make for great baby toys are objects that a baby can open and close (which they're likely to do repeatedly, occupying them for much longer than you'd predict) and objects or toys that have faces, which babies are known to gravitate toward.

If you're wondering what toys you could put on your registry, or what toys to suggest for grandparents to get a baby grandchild, there are a few that are particularly good to add to your collection. Occupational therapist Christie Kiley, author of the blog MamaOT, suggests a baby gym as one of the most versatile baby toys, saying, "You can literally use a baby gym from day one." She points out that while there is a range of baby gyms available, you'll simply want one that has loops from which to hang additional objects, like a mirror or plastic links, which your baby can look at or grab from lying down on under the baby gym.

A baby gym is a great toy that can teach a number of skills, including reaching and grasping, and bringing your baby's hands together at the midline, a critical developmental skill most of us parents are totally unaware of. Kiley suggests parents "put toys in various positions: placing them over the middle of the body encourages hands to come together at midline (a VERY important skill); placing toys to the side encourages rolling to the side and, eventually, rolling all the way to tummy." A baby gym can also provide a welcome distraction to your baby when they're doing tummy time in those very early days, when it can be one of the most infuriating tasks for your little one.

And while those bright, ridiculously loud baby toys are the things of parents' nightmares, they're also exactly what stimulates babies' brains. According to Parents, "Just after birth, your baby sees only in black and white, with shades of gray. As the months go by, your baby will slowly start to develop his color vision," which usually happens by month four. While us parents arguably prefer more muted colors, those specifically colored toys "aren't naturally stimulating colors for your baby's vision." Per Parents, "Black and white, along with primary colors, such as red, orange, yellow, and blue, are much more stimulating."

Either rethink your nursery decorating plan, or at least invest in some brightly colored toys or tupperware to interest your baby and stimulate her brain. And remember, minimalism is the name of the game.