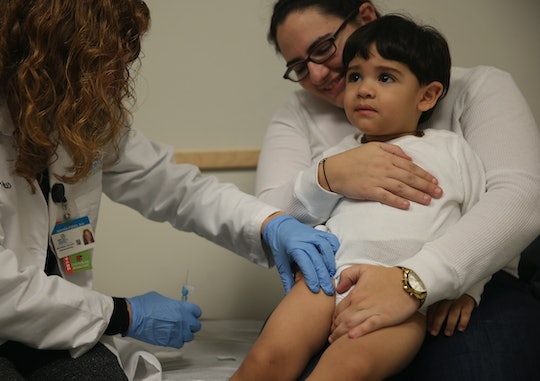 How Many Unvaccinated Kids Are There In The US? They're Vulnerable To Outbreaks

Vaccination is a hotly-debated parenting topic in the U.S., with parents on both sides holding strong opinions about what they think is best for their children. But even though families currently have the option to forego (or delay) vaccination based on religious or philosophical beliefs in most states, recurring outbreaks of vaccine-preventable diseases has led medical experts to urge parents to vaccinate their children fully and on-time — particularly as the outbreaks are being seen primarily in pockets of the country where vaccine adherence is low. How many unvaccinated kids are there in the U.S.?

According to CNN, even though 95 percent of children in the United States were fully vaccinated as of 2015, the actual percentages vary throughout the country. According to individual state data from the Centers for Disease Control, some states — like Mississippi and Maryland — have kindergarten vaccination rates higher than 99 percent. But many other states have significantly less vaccination adherence. Twenty-six states, according to CNN, fall short of the government’s 95-percent MMR coverage for kindergarten children, and seven states — Colorado, Arkansas, Kansas, Indiana, Washington, Idaho and North Dakota — have less than 90 percent vaccination adherence, which is often considered to be the minimum percentage needed for herd immunity in a population, according to the CDC.

Most recently, health officials in Tennessee reported an outbreak of six measles cases in Memphis in less than a week, according to the New York Times, and all of the six individuals were unvaccinated (including a number of infants who were too young to be immunized). And those outbreaks are nothing new: 667 cases of measles were reported in the United States in 2014 (the largest number of outbreaks since the disease was thought to have been eradicated in 2000). And 70 percent of the reported measles outbreaks in 2015 could be linked back to an outbreak that began in December 2014 at a Disney theme park, where the majority of people who contracted the disease were unvaccinated children.

So why is it, then, that parents are continuing to refuse vaccinations when evidence suggests that their children are at a much higher risk than their vaccinated peers? According to CNN, parents who don’t vaccinate are much more likely to report concerns about side possible side effects, fears about autism, questions over the necessity of vaccinations, as well as greater distrust in doctors and the medical community. Parents of unvaccinated children also tend to share certain characteristics: they are most often wealthier, white, and college-educated, usually live in English-speaking households, and are likely to have private health insurance. But they also tend to cluster in the same communities and neighborhoods, making it easier for outbreaks to occur if a case of communicable disease is reported. According to TIME, 9,210 children in California contracted whooping cough in 2010, thanks in large part to the unvaccinated population that helped it spread.

The link between vaccinations and disease control is well-established, but so long as parents’ unfounded fears remain, immunization rates among children are likely to remain where they are. And, while some of the more daunting side effects of vaccines have been debunked (there is zero scientific evidence to suggest that the MMR vaccine causes autism, for example), there are still risks associated with vaccines, according to CNN. Children who get the influenza vaccine, have a rare chance, for example, of developing Guillain-Barré Syndrome, which could lead to temporary paralysis. So what can be done to help improve immunization rates in the U.S. given the wealth of often-frightening information available for parents to easily Google?

According to the CDC, connection and communication between parents and doctors is key. That includes finding a doctor you feel you can trust, but also includes doctors remembering to be mindful that it is scary for parents to hear vaccine horror stories from other parents, even if they know those stories aren’t supported by science. Even though a percentage of parents will still likely remain staunchly anti-vaccination no matter what, a little understanding and extra support for parents who are honestly confused about what’s best for their child can go a long way to ensuring that all children are protected from preventable diseases.

But ultimately, the majority of doctors agree that vaccination is almost always the right choice. As medical epidemiologist Dr. Manisha Patel told the New York Times,

If you can get vaccinated, you should get vaccinated. That’s the best way to protect not only yourself, but other people around you that can’t get the vaccine, and to protect these outbreaks from happening.