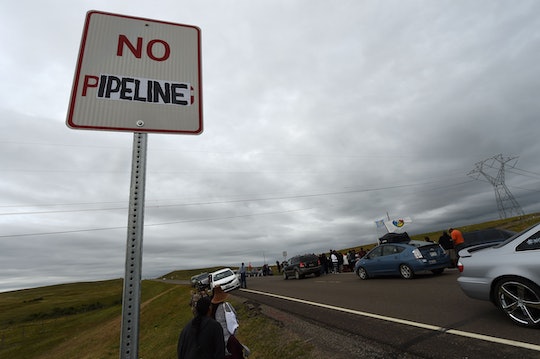 Water Contamination From Oil Spills Is A Big Deal

If you've been following the news recently, or even just happened to overhear coverage in your Uber on the way to work, you've probably heard of the controversy surrounding the Dakota Access Pipeline. While it can be confusing to understand the exact reasons that there is so much resistance to the pipeline, the gist of the situation is this: the Standing Rock Sioux Tribe's clean water and lands would be greatly threatened if the DAPL were to be completed. And while protestors had blocked the advancement of the pipeline last year, President Donald Trump has just signed a new executive order that would undo the Army Corps of Engineers' safeguarding of the Sioux Tribe's water source, which came in the form of a rejected permit. While many Trump supporters are touting this action as a great chance for Americans to find employment with construction work on the pipeline, many environmentalists are fighting back, with claims that the pipeline is neither safe nor necessary. Trump's latest action, and the long-standing argument against it may have you wondering, just how many water contaminations from pipelines are there every year? And should it concern you?

Well, the answer to that question in and of itself may seem simple, but like most claims, is dependent upon a number of variables.

First of all, according to a report by CityLab, there have been a total of almost 9,000 pipeline accidents over the past 30 years. While not all of these incidents are as environmentally harmful or significant as others, it's still important to remember that they made an impact, and, whether large or small, that matters.

Because all of those incidents could have been prevented, and that's the crux of the Standing Rock argument. Because the fact that the tribe's primary source of water is being put at risk, and contamination is far more likely than it is unlikely if the pipeline gets built.

What's more, in 2015 alone there were over 640 oil and gas spills that affected water in some way or another. While it isn't clear whether or not these spills contaminated human drinking water, they still happened, and that means they could happen at Standing Rock, where people's lives are now at risk.

For a real-life example of this, consider that the environment is still recovering from the BP oil spill, and that was in 2010. The Deepwater Horizon incident affected human lives, animal lives, and the safety of our citizens. While much precaution has been made to try and prevent anything like that happening again, and engineering advances have been made since, we can't forget. There is always the possibility of danger when pipelines are being discussed, and in the end, we have to decide what's more important to us: more oil, or human life.