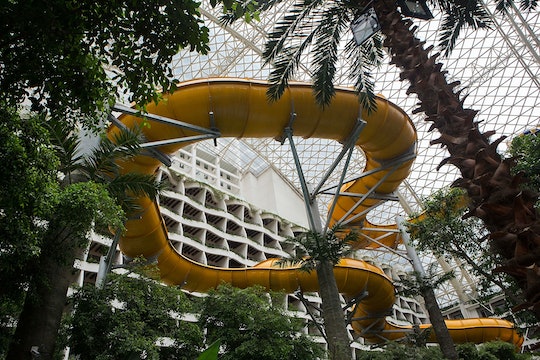 How Many Waterslide Accidents Have There Been? The Schlitterbahn Accident Is Terrifying

A nightmarish incident took place at the Schlitterbahn Water Park in Kansas City on Sunday. A 10-year-old boy, Caleb Thomas Schwab, died while riding the Verrückt, dubbed the "world's tallest waterslide." It is a tragic and unspeakable incident that's sure to heighten concerns for families visiting water parks and other amusement parks throughout the summer. This is not the first time a tragic water park-related incident has been reported, but how many waterwslide accidents have there been total? Schwab's death certainly raises a lot of questions.

Note: Details on Schwab's death may be disturbing to some.

Schwab boarded the waterslide with two women who are unrelated to him. According to police reports given to ABC 7 News, the 10-year-old died of a "fatal neck injury at the end of the ride." Police have also confirmed to TIME that Schwab was found dead at the bottom of the ride in a pool, decapitated.

The Verrückt, translating to "insane" in German, is 168 feet tall, requiring riders to walk 264 steps up flights of stairs to board the ride. The water slide, which the Schlitterbahn Water Park marketed as being higher than the Statue of Liberty, debuted in July 2014 after several weeks of delays due to failed crash tests with sandbags. A 2014 ABC News special on the Verrückt revealed that safety nets were installed after safety test glitches.

So how safe are waterslides? Apparently tracking exact waterslide accidents can be tricky.

According to a report by the Associated Press, the Red Cross cites estimations by the U.S. Consumer Product Safety Commission, which revealed that more than 4,200 people are taken to the emergency room a year from a water park-related injury.

As for injuries caused by water slides specifically, a 2014 report by NJ.com, evaluated data from the New Jersey Department of Community Affairs, revealing that waterslides posed a larger threat for injuries than rollercoasters. According to the State Department's findings, out of 552 reported amusement ride accidents spanning over five years, 122 were waterslide-related. The NJ.com report also indicated that out of the 552 injuries reported, one of the injuries resulted in death – though it's unclear whether it was waterslide-related.

"[People] can put themselves into positions that were not originally intended,” Tammori Petty, a spokesperson for the State Department said. “Water flow is still not an exact science and unpredictable things can happen.”

A CDC report in the 1980s focused specifically on waterslide injuries at a water park located in Washington. The results: From July 13 to Aug. 31 in 1983, the rate of injury on waterslides was 8.1 per 10,000 rides sold.

Since the day he was born, he brought abundant joy to our family and all those who he came in contact with. As we try and mend our home with him no longer with us, we are comforted knowing he believed in his Savior, Jesus, and they are forever together now. We will see him another day.

It's clear the family will need privacy in this very difficult time.