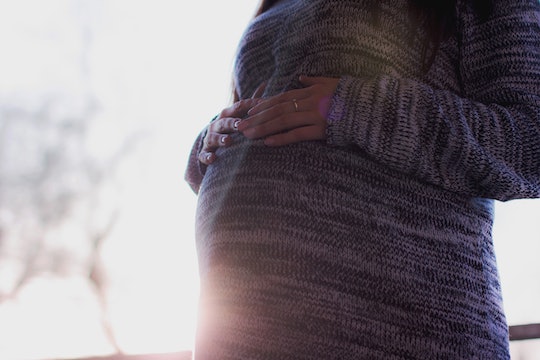 Here's Who Is Most Likely To Get The Epidural

With advances in modern medicine, women have greater control over the process of giving birth than ever before. An epidural allows a woman in labor to decrease or eliminate pain, but the procedure is both celebrated and stigmatized. Some moms believe it's a dangerous alternative to natural childbirth, while others can't imagine having a baby without it. Given the controversy, how many women are getting epidurals now compared to previous generations? The majority opt for an epidural, according to a report published by the Centers for Disease Control and Prevention (CDC). But as with any medical procedure, there are both benefits and drawbacks.

Most women giving birth now want the pain relief offered by an epidural. Dr. Aaron Caughey, chair of the Department of Obstetrics and Gynecology at Oregon Health and Science University, told Live Science in July 2016 that approximately two-thirds of pregnant women choose to get an epidural. A CDC report drawing on data collected from 27 states found that 61 percent of moms who gave birth vaginally in 2008 to a single child "received epidural or spinal anesthesia." Greater "maternal educational attainment" made a woman more likely to get an epidural, as did "early initiation of prenatal care." The older a woman was, the less likely she would be to get an epidural. And out of all racial groups studied, non-Hispanic white women chose anesthesia most often: 69 percent went for it. Hispanic, American Indian, and Alaska Native women were the only racial groups that reported fewer than 50 percent of women choosing to get an epidural. Even so, the CDC found that women in the United States are overwhelmingly open to epidurals.

It's difficult to determine precisely how many epidurals are given each year; according to the Chicago Tribune, obstetric associations don't need to report the number of epidurals provided to patients. Physicians do seem to be in agreement that the percentage of women choosing epidurals is increasing, with a particularly large spike since the early 2000s. Dr. Ku-Mie Kim, head of obstetric anesthesiology for Loyola University Health System, told the Chicago Tribune that between 2001 and 2012, the epidural rate for Loyola patients increased from 75 percent to almost 90 percent. Northwest Community Hospital reported that 50 percent of women in labor chose to get an epidural in 1991, while 80 percent selected the procedure in 2012.

The increase in the number of epidurals may be in part due to evolving technology; Live Science reported that modern epidurals involve a lower dose of drugs and give patients more control over how much of the anesthetic is administered. There is still potential for women to respond negatively to an epidural, from a headache to a hemorrhage. But for many women, just knowing that the epidural is an option can be comforting.

There is no right way to give birth; having a baby is beautiful no matter the amount of medical intervention required or requested. Advances in technology empower women to have more choices, and the latest epidural numbers show that moms are definitely exercising the freedom that options afford to have a wonderful birth experience.