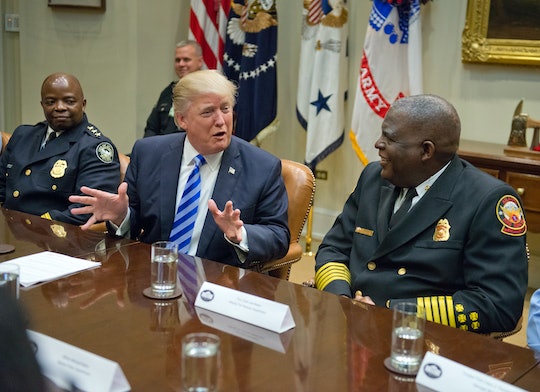 Did The Afghanistan Bomb Kill Children?

On Thursday, the United States military dropped the largest and most powerful nonnuclear bomb on a tunnel complex reportedly used by ISIS in eastern Afghanistan. The massive ordnance air blast (MOAB) bomb, nicknamed the "mother of all bombs," destroyed the ISIS cave system, leaving dozens of people dead. But how many women & children did the Afghanistan bomb kill? Military officials from the United States and Afghanistan reported Friday that no civilians were killed in the attack.

According to the New York Daily News, the 21,600-pound massive bomb that dropped on the ISIS-affiliated cavern killed at least 36 militants, per official accounts. A spokesperson for the Afghan Defense Ministry also reported that the U.S. strike only destroyed the ISIS base it targeted. But residents who live near the Achin district of Nangarhar, where the MOAB was dropped, said they heard and felt the blast from miles away, according to multiple news outlets.

Mohammad Shahzadah, who lives over a mile away from the MOAB attack site, told The Guardian that, when the bomb dropped, "the earth felt like a boat in a storm." The blast broke his windows and doors, and made cracks in the walls of his home, he said.

I thought my house was being bombed. Last year a drone strike targeted a house next to mine, but this time it felt like the heavens were falling. The children and women were very scared.

Thursday's assault is the first time the United States used the MOAB in combat, thought it's not the largest bomb in the country's military arsenal. According to Los Angeles Times, U.S. Army General John W. Nicholson, who commands U.S. Afghan forces, said in a statement that “the strike was designed to minimize the risk to Afghan and U.S. forces conducting clearing operations in the area while maximizing the destruction" to the ISIS-affiliated fighters stationed there. Officials are still assessing the damage of the strike, of which the Pentagon released a video on Friday (Warning: this footage might be graphic to some).

Although no civilians were hurt in Thursday's strike, civilian and ally casualties were reported in at least three other attacks launched by the United States in the Middle East, according to CNN. A U.S.-led airstrike in Syria on Tuesday reportedly killed 18 allies from the Syrian Democratic Forces. Iraqi officials and Syrian activists also reported civilian and ally casualties in two other U.S.-led bombings in the past month in the two countries, according to CNN. The U.S. is allegedly investigating these military actions.