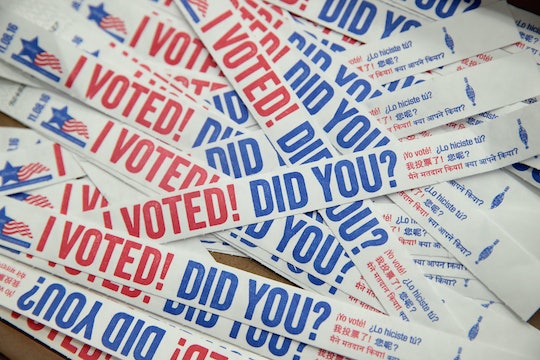 How Many Women Voted Early? Current Numbers Show They're Highly Motivated This Year

With Election Day just two weeks away, more than a million people have already cast their ballots for president, and data shows that many of those early voters are women, many of them registered Democrats. So, how many women voted early? So far, women from three crucial battleground states — North Carolina, Florida, and Georgia — have reportedly turned up early to place their voters in vast numbers.

In the wake of many of the controversies surrounding Donald Trump and his reported treatment towards women, polling numbers show that Democratic women in particular are especially motivated to direct the course of this election. As Politico reported, there was a stark difference in North Carolina among women voters — 87,000 Democratic women have already voted, compared to only 60,000 Republican women. Meanwhile, men in North Carolina are more closely divided with 50,000 Democratic and 50,000 Republican men having voted already.

"That’s certainly an energy and mobilization indicator this early for the Clinton campaign and Democrats down ballot," J. Michael Bitzer told Politico, who is an expert on North Carolina’s early vote at Catawba College.

Early voting in Florida also reflected a similar pattern, with about 55 percent of the 880,000 people who voted early being reported as women. Which is also remarkable to note because, as Politico pointed out, "women make up less than 53 percent of the state's registered voters." Georgia also saw a notable turnout among early voting women, with new polls showing Democratic candidate Hillary Clinton leading over Trump.

So far, more than 1.4 million people have already cast their ballots for president across the country and the rise in women requesting absentee ballots since the first presidential debate shows an interesting pattern. It's important to remember that, after the first debate, Trump went on several Twitter rants against Alicia Machado, the former Miss Universe, in which he mocked and shamed her for gaining weight.

"Maybe that whole controversy surrounding the former Miss Universe really prompted some women to exercise their right to vote," Michael McDonald, an associate professor at the University of Florida and who has been tracking the results for the United States Election Project, told Circa.

McDonald cautioned that the early-voter turnout among women might be more of a bump rather than a permanent trend, but he also spoke with Politico and said that it at the very least shows the "interest and enthusiasm from these women."

While the final outcome of the presidential race won't be known until Election Day, the current numbers indicate that women are being proactive and are making a strong statement about recent controversies by voting early and making themselves heard — and that's positive news all around.