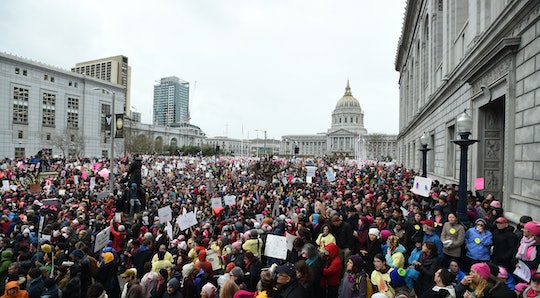 Arrest Totals At The Women's Marches Were Shocking

On Saturday, millions of women and allies all over the world gathered together in cities to defend their rights and voice their opinions on the concerning new Trump administration and its efforts to roll back access to a number of things. The sheer amount of people attending these marches, fighting together, was nothing short of amazing. But while the numbers were impressive, just how many women were arrested at the Women's March? The actual figures are somewhat surprising, all told.

The people marching were not looking to cause unrest — they were looking to have their voices be heard, peacefully. That had been the goal since the idea for the Women's March was first created, according to the group's official mission statement, which explains one of the purposes for marching was to "send a bold message to our new government on their first day in office, and to the world that women's rights are human rights."

Going off of that, it should not be a surprise that absolutely no one was arrested in Washington D.C. — where an estimated 500,000 people gathered together to let their voices be heard, according to CNN. Yes, you read that right — no one was arrested during the D.C. Women's March on Washington. How's that for a peaceful demonstration?

In 21 other cities across the nation, only four arrests were reported, according to CNN. Out of hundreds of thousands of protesters in these cities combined, the small amount of people getting arrested was stunning and further proved that the march was peaceful and effective at delivering the message of the march. The marchers made it clear that they just wanted to be heard — which is a message that was sent across the world. Additionally, the police in some cities seemed to support the peaceful marches, often donning pink hats alongside marchers in solidarity, as they did in D.C.

This is a stark contrast to the protests that took place during the inauguration on Friday afternoon in downtown D.C. which resulted in the arrest of more than 200 people, according to CNN. During the Friday protests, according to NBC News, business windows were smashed by a rogue group of anarchists, a limo was set on fire, and rocks were thrown at police (some have speculated these things were also carried out by the same anarchists). Police officers responded to these acts by "launching smoke and flash-bang devices." More people across the nation — in cities such as New York, Dallas, and Chicago — were arrested on Friday at protests, according to CNN.

But Saturday showed a different story — one with marchers, walking with the goal of making their voices heard. Instead of being violent, they were looking to make a statement — which could not be clearer in the sheer amount of people that showed up, speaking their minds through signs and chants. The march was a great way to welcome President Trump to his first week of presidency — and these marchers have made it clear they're not going away without a (peaceful) fight or until their concerns are addressed.