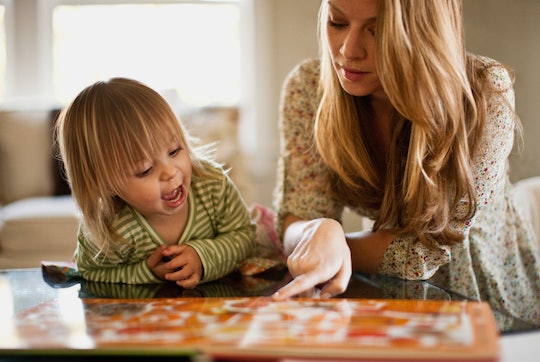 Hearing your child start to talk is a thrilling time for parents. Each word they learn can you fill you with pride and their adorable voice can melt your heart. But on the flip side, seeing your child struggle with a speech delay can be devastating. If you're curious about how many words your toddler should be learning every day, you should know that there's a wide range of what's considered normal.

I spoke with Heather Boerner, the owner and head Speech-Language Pathologist at Chatty Child Speech and Occupational Therapy, to figure out when parents should worry and when they should be a little more patient. She says there are some general guidelines to see where your little one stands. "At 1 years old, a child should be saying approximately four to six words. By the time a child is 18 months old, they should be using 20 to 50 words. By the time a child is 2 years old, they should be saying and producing 200 to 300 words," according to Boerner. You should also see a fairly large jump between their second and third birthday. "They should really be learning a new word a day or two or three words a day," around this time, Boerner says. Learning at that rate should give your toddler between 900 and 1000 words by the time they turn 3. (You can explore these guidelines further on the American Speech-Language-Hearing Association website at ASHA.org.)

If your toddler isn't learning a new word or two every day, however, Boerner says you shouldn't necessarily panic. "It’s important to know that every child develops differently and within their own pace… Even within typically developing children, we’ll see differences in the way each child acquires language and the rate at which they acquire language."

Some kids can simply be late bloomers when it comes to language development and speaking out loud. Sandy Dorsey, a Speech Language Pathologist and the owner of All About Speech, says it's not unheard of to see a child who "isn’t saying anything up until a certain point and then it’s just like a growth spurt and something clicks and he’s now saying all these words.” Parents should also recognize that a typical toddler is going to be able to understand a lot more than they can actually say. "If you show them 20 objects and they can point to all 20, that doesn't mean they necessarily need to be able to label the 20 and know the words," Dorsey says. "The understanding comes first, and then the verbal."

If you feel like your child is falling behind the benchmarks, though, there are lots of simple ways to promote their language development. Reading together as often as you can and singing songs are great, fun ways encourage them. "Speak using short phrases," suggests Dorsey, and take every opportunity to narrate what's going on around you. "While you’re out, just say what you see. 'Oh, a tree! and point to it.'" But keep in mind that it can take lots of patience and repetition. "The child may need to hear the word many times in order to make the object-word association and then in order to produce the word," Boerner explained .

Keep your pediatrician in the loop as well about about any concerns you might have regarding speech. "It’s always a good idea to come and seek a professional’s help," says Boerner, if you have cause to be concerned, and it can't hurt to get an evaluation. "If there an issue that we need to address, early intervention is always the best thing to do."