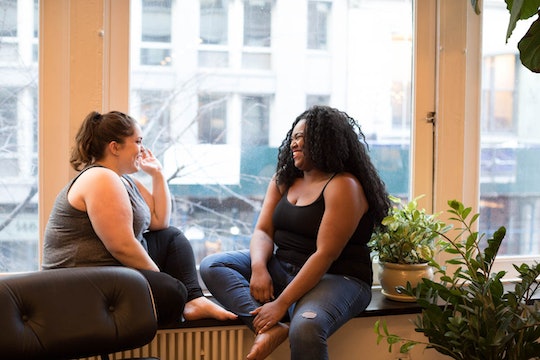 In today's world where social media likes and comments act as a primary source of communication, it feels fair to say that we're more often finding valuable relationships in unexpected places. That holds true for Pranee Salman, a 38-year-old estate planning attorney and mom from San Diego, California.

After her son Elliott, now 4, was born, Salman tried the stay-at-home-mom life, but it wasn't long before she was ready to jump back into her career. “I wasn’t happy,” Salman admits of her time away from the workforce. The switch from full-time law to full-time mom felt jarring, and she yearned to put her hard-earned skills back to use in the outside world.

A year passed and she finally took the plunge out of the house and back into the hustle and bustle of the workforce. As she faced the demands of a career in law coupled with the challenges of running a household, Salman struggled to hit the elusive work/life balance — an problem many working parents face.

For a lot of new moms, the biggest issue is flexibility...when you have a nine to five, it doesn’t always provide it.

With this in mind, Salman decided to take control of her and her family’s schedule by opening her own law office, in hopes that she'd finally be able to find the flexibility and job satisfaction she was seeking as a new mom. After learning the pros and cons of working for herself, Salman realized that although she'd found the balance she was hoping to strike in her schedule, there was still something missing about her work-from-home experience.

Realizing she missed the buzz of being around other workers, in January 2017 Salman decided to join Hera Hub, a co-working space for women that has locations in San Diego, Chicago, Atlanta, Sweden, and more. The environment quickly paid off, as she began to find the ability to bounce ideas off of people, and (hopefully) meet like-minded moms who also wanted to tackle career challenges as reasons she joined a co-working space in January 2017.

“My office is a mile from my house intentionally,” says Salman. “That’s so I can be accessible if needed. It helps tremendously and gives me more time to do things efficiently.”

Newly settled into her women-centric work environment, Salman felt she'd finally found a complete resolution to the challenges she had faced along the way. Then she met Michelle Camp.

“I wish I can say I saw her across the room and it was love at first sight,” laughs Salman. “Instead, it was a simple introduction from Sarah [Community Director of Hera Hub Sorrento Valley]. She thought fellow attorney and parent Michelle and I needed to connect, since we have similar backgrounds.”

Similar backgrounds were just the start. They met for coffee and hit it off immediately. And to anyone who’s had trouble making friends as an adult, you’ll know that finding this type of connection is special.

“It’s pretty easy to become friends with Michelle — if you know her, you’ll understand,” nods Salman.

Perfect timing aside, Salman also credits their similar professional and personal experiences as a catalyst for their friendship.

It all comes down to having a support system, with people who get it.

“We have the same type of background at bigger firms, then both went out on our own to find that work/life balance,” says Salman. Camp had suffered a strenuous commute from Orange County to San Diego, which kept her from her daughters more than she’d like. They bonded over the trials of working high-stress jobs on top of parenting, as well as their individual leaps towards entrepreneurship.

As time went on, their organic friendship blossomed further when they both discovered they were pregnant — Camp with twins, and Salman with her second son. Work and parenting discussions evolved to include pregnancy, adding another layer to their relationship. Even during difficult days, having a like-minded ear proved to be vital, as Camp provided a sounding board for Salman, and vice versa.

But even with the support of her “mom bestie,” Salman admits it’s tough to “do it all," an unrealistic expectation that many working mothers labor under. However, having support from a colleague in a similar place in life helps her get through the tough times.

“With me, seeing Michelle succeed is really motivational. It all comes down to having a support system, with people who get it. For me, Michelle was that person,” says Salman. Encouragement between the two working moms flourished as their friendship continued to deepen.

That friendship, along with the flexibility afforded to Salman and Camp as entrepreneurs, came in handy during Camp’s high-risk pregnancy. With frequent doctor appointments and early labor, her career had to adjust in a way that employers aren’t always receptive to. But through it all, Salman was there for Camp.

However, their relationship proved to be mutually beneficial. Their chance meeting was a hugely positive influence on Salman’s career — but it wasn’t the only one. As an estate planning attorney, she also credits motherhood as an additional way to cultivate compassion and empathy for her clients. When I asked Salman if she had any tips for aspiring mom entrepreneurs, she kept it realistic:

“It’s different for everyone. Everybody goes through trials and tribulations. That’s completely normal. Be open to the change that happens after becoming a mom and figure out what works best for you. It’s OK to feel defeated; truthfully, that’s part of the process. For the most part it’s not easy. There’s this expectation for it [motherhood] to be innate and come naturally to you and you’ll figure it out. That’s not the case for almost everybody! This is a side of you that was untapped — that you didn’t know yet. There’s going to be a learning curve. Allow yourself to learn who you are.”

She added, “For any moms wanting to venture out on their own, use that strength and harness it to do something that makes you the best version of you.”

Sometimes making that best version of you means tapping into your support system. It may be family, or friends you’ve had for years. But sometimes it’s found in the most unexpected places.