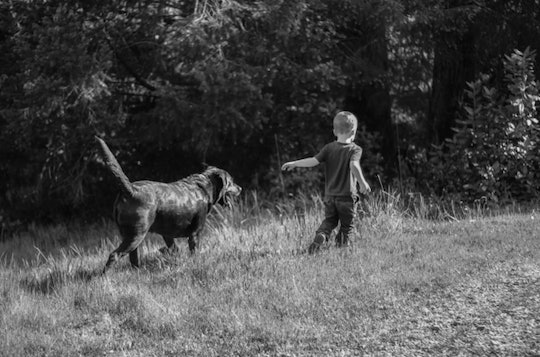 How Minimalism Has Allowed Me To Be A Better Mom

One evening, I cleaned out a desk drawer while listening to a TEDx talk from Joshua Fields Millburn and Ryan Nicodemus on minimalism. That notion of living a better life, a richer life, with less stuff resonated with me. I did feel like I was wasting my time, damaging my relationships, because I was so busy obsessing over stuff. I was a constant organizer, and I felt like I was always cleaning. Eeven though I was a total cheapskate, I was still always wanting something material.

So I threw out the many pens I never used, the bits and pieces of old erasers, the parts belonging to I-don’t-know-whats, old calculators, old business cards — things I had once organized time and again. Throughout the remainder of the week I cleared out my kitchen, my bathrooms, and my bedroom closet. I let go of stuff I had dragged around with me for years yet never used. I felt lighter, freer, and minimalism took root in my life.

The main lure of minimalism wasn’t simply having less stuff. It was living a more intentional life. I wanted to get rid of my excess so I could focus more fully on the thing I valued most: my family. I was constantly cleaning and organizing, and it was draining. There never seemed to be enough space for all our stuff. As we grew from a newlywed couple to a family of three, then four, then five, our belongings multiplied out of control.

As I started to get rid of all the unnecessary stuff in my life, I was overwhelmed by the emotional weight that was lifted from my shoulders. My life truly began to feel more full because I had less material belongings. I found that I wasn’t as stressed out. I didn’t have the need to organize so often. I was able to clean quickly because there weren’t mountains of junk to clear away first. I felt lighter, happier.

I also felt like a much better mother. I didn’t feel better because I wasn’t spoiling my kids or because my house was cleaner. I felt better because I had more time to spend with my children, and that time was uninhibited by the persistent feeling that I should be tidying up. I was able to be fully present with them because there wasn’t clutter taking up mental and physical space. There was nothing stuffed into a junk drawer to be dealt with at a later time, nothing nagging in the back of my mind.

When I started my minimalist journey, I focused solely on my own belongings, but as time went on I decided to reach into my children’s lives and pare down on their stuff as well. I noticed them getting overwhelmed and bored with all their toys. There was too much to do and not enough to really inspire them. I started small, with the nick nacks and broken parts of toys they never used. I felt a strange guilt about getting rid of their stuff, but soon I noticed that the lack of clutter in their lives had the same effect it had in mine: they seemed happier, more content with less.

As I realized just what an obscene amount of stuff they had, I started to go through their toys more purposefully. I made sure the toys they had were ones which encouraged imaginative play. I made sure they were toys that actually got used. There were new birthday presents from years past that had been played with once, maybe, then tossed aside. There were baby toys they never used that I was saving for the next baby to not use. No more.

The guilt I had initially felt in discarding their stuff was replaced by a sense of relief as time went on. My oldest eventually started asking me to get rid of stuff they never used. The less toys they had cluttering their rooms, the more space they had to play. I noticed them playing together more often, spending more time outside, and their imaginative play blooming. When Christmas came around that year, my son’s note to Santa requested a Frozen doll for his sister and stated, “I don’t need anything.”

We didn’t need anything. In truth, we never really had.

Minimalism helped us separate our wants from our needs and find contentment as a family. Minimalism in our home is still a constant work in progress, but it helps ground me in the decisions I make for my family. It makes me conscious of where I am placing value in my life, and urges me to always choose wisely. The time we spend together, the memories we make, these are the important things to cling to.

More Like This
Ginger Zee Had A Perfect Response After A Troll Asked Her "Who's Raising Your Kids?"
It's A Beautiful Day In Jenny Slate’s Neighborhood
Amazon's Early Prime Day Deals Are Selling Quickly: Here's What You Don't Want To Miss
40 Girl Power Quotes To Inspire & Encourage