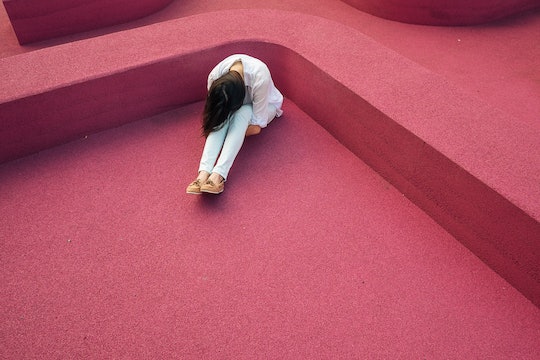 There's a lot I feel guilty about as a mom. I work too much. I let my toddler eat french fries. The apartment isn't sparkling clean. The kiddo watches too much TV. He's not enrolled in music classes. The list goes on. I've only experienced direct mom-shaming once for my choices; mostly, though, other parents make underhanded quips. Still, I've thought a lot lately about how mom-shaming affects maternal mental health because I'm knee-deep in a parenting funk. And what I've found might make you mad.

According to an online survey conducted by baby food company Beech-Nut, more than 80 percent of millennial moms have reported being mom-shamed. And the problem is cyclical; Beech-Nut also found that moms who were shamed were more likely to judge another parent.

Mom-shaming is demoralizing behavior. According to Marie Claire, moms who are critical and cruel of others can cause anxiety and pain in the parent they're targeting. And a study published in June by the University of Michigan found that people who mom-shame — whether it's a family member, another mom, or an online troll — cause "maternal anxiety;" specifically, 47 percent of moms who responded to the survey said they felt unsure of themselves and their parenting skills.

Sarah Clark, poll co-director and one of the study's authors, told Broadly,

I think we worry both about the mom having anxiety and maybe feeling like she's not doing a good job, which could lead to depression, but we also worry about parenting becoming harder because we're not having a consistent approach, which then leads to more criticism, which can get into a vicious cycle.

According to the Beech-Nut survey, 68 percent of millennial moms believe mom-shaming has gotten worse over the years. But in a lot of ways, "mom-shaming" is a new buzzword for a centuries-old old habit. I remember my mom being judged for her parenting choices while I was growing up in south Brooklyn. I'm now in my mid-30's with a child of my own, and I feel those same smug eyes staring down at me.

I can't say I'm not guilty of doing the same at one point or another. I can name at least a few times when I've put on my critical pants. But it's behavior of which I'm ashamed — particularly because, as a mother living with depression, I know full well how much other people's judgments can weigh you down. So let's make a commitment to be more supportive of each other's choice, for the sake of our mental health.